Wii Launch: Reggie with a Happy Customer in New York

For Nintendo fans, 2006 started off as a year based more on hope and dreams than reality and substance. The GameCube was dead-on-arrival with very few notable titles in the pipeline to hold people over until the upcoming release of the "Revolution." With the breakout success of the DS, Gameboy Advance support was also slowly waning. In many ways, 2006 was symbolic of Nintendo shedding its old skin and transforming into its present self. 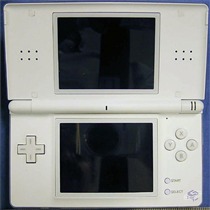 In late January of 2006 Nintendo announced a brand new redesign of the increasingly successful DS, slated for release later that June. The “DS Lite” was confirmed to be a smaller, brighter, and lighter version of the existing DS hardware.

Come early February, players were treated to two solid Nintendo offerings; one for each of Nintendo's dying systems. Chibi-Robo! for the GameCube and Drill Dozer for the

Gameboy Advance both landed in stores come February 6. Both titles would later go on to win NWR awards, though both seemed to be overlooked in the marketplace due to their

late release in the lifecycles of their respective systems.

In the middle of February, Opera Software announced a browser for the DS Lite, a foreshadowing of the portable's ever-expanding featureset. While this was a notable development, February was the calm before the storm. The month of March marked the true beginning of the story of the Nintendo market dominance we see nowadays. 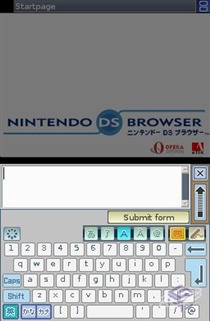 On March 2 the DS Lite was released in Japan, selling out immediately. The scarcity of DS Lites in Japan would continue for years

following this day. At the same time, Sony announced that their upcoming PlayStation 3 system had been pushed back to a November release. At the time, the release date of the Revolution was still unknown, though speculation placed its release in the same time frame as the PS3.

Regardless of the commotion in the home console market, the DS continued its ascent in sales figures and quality titles. March brought DS owners Metroid Prime Hunters (which featured the first appearance of online voice chat), Tetris DS, and Animal Crossing: Wild World in Europe. 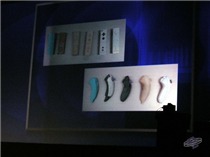 Before the close of March, Nintendo president Satoru Iwata would keynote the Game Developers Conference on the subject of "Disrupting

Development". The speech seemed fairly insignificant at the time, but was truly the writing on the wall for Nintendo's success. He cited Pepsi's recent success with bottled water as a demonstration of "disruption." Instead of the company figuring out how to sell more cola, they simply started bottling water, a business move which proved wildly successful for the drink maker. The parallels with Nintendo's own strategy following the GameCube era are undeniable. 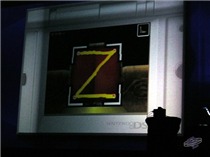 During Iwata's keynote, he also dropped a bombshell on DS owners when he showed off the completely touch-controlled The Legend of Zelda: Phantom Hourglass. The game was originally slated to see release worldwide by the end of the year; however, it would actually not see release for another year and a half.

Iwata closed his keynote with further talk of the upcoming "Revolution", and exactly how Nintendo went about coming up with its unique design.

April brought another Nintendo break-out success title, Brain Age: Train Your Brain in Minutes a Day. This title, along with the previous year's release of Nintendogs and

Animal Crossing: Wild World, proved to be major influences on non-gamers to get into gaming. This influx of new gamers only served to further boost the DS’ already-impressive success. 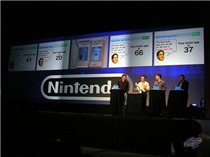 Will Wright and Bill Test Their Brains

Before April closed, Nintendo did something nobody quite expected. On April 27, Nintendo made an official announcement that what was once code-named Revolution would be officially known as "Wii". While nothing sounds suspect about the name now, at the time it sent the gaming world into a frenzy (on a

personal note, it was during this period that I came out of my lurking shadows and began involving myself in the rampant discussion in the Planet GameCube Forums).

With E3 around the corner, Nintendo's name change announcement was undoubtedly a preemptive strike to eliminate the chance of any competitors overshadowing their upcoming

unveilings. Come May 9, Nintendo continued to wow the gaming world with the announcement of the new Mario title Super Mario Galaxy, Diddy Kong Racing DS, Yoshi's Island DS, and Star Fox DS (known now as Star Fox: Command). Nintendo also squared away the release window for Twilight Princess and announced it as a Wii launch title. Finally, Nintendo wrapped the show with the debut of their upcoming Classic Controller peripheral, which was a full-fledged controller as opposed to the controller shell that most were expecting. 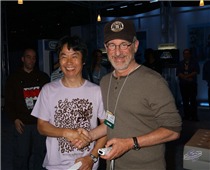 One day later, Nintendo stunned the world yet again with a surprise showing of the curiously absent new Super Smash Bros. title, Super Smash Bros. Brawl. The video revealed a number of new characters coming to the series including Wario, Pitt, and Zero Suit Samus, as well as a third-party character, Solid Snake from the Metal Gear Solid series. Nintendo closed out E3 with one final surprise title, Super Paper Mario, a last-hurrah title for the GameCube (ironically later rescheduled as a Wii release). 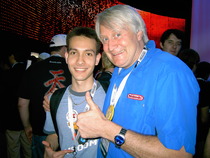 Aaron and Charles Martinet in the Wii Arena

At the end of May Reggie Fils-Aime was promoted from his Public Relations post to President of Nintendo of America. After Reggie's promotion things went quiet on the Nintendo front, with the exception of the release of Baten Kaitos Origins. It was obvious that all efforts were being put towards the upcoming Wii launch in November. 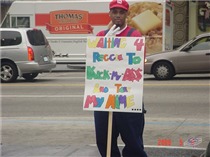 A Reggie Fan Shows his Support

During this relatively slow news period, Planet GameCube was slaving away at a brand new site layout and name to coincide with the launch of the Wii system. On November 14th Radio Free Nintendo announced that Planet GameCube would be officially rebranded as Nintendo World Report. On November 16th, just three days before the launch of the Wii, the new site layout went live and the change was official. 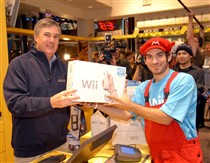 George Harrison and GameJew in L.A.

On November 19th Nintendo officially launched the Wii system, and it was met with universal praise and sell-out crowds. Many gamers had lined up for the system days before release just to ensure a system and additional accessories. Even the Nintendo World Report staff had a number of stories of their own from the crazy launch, including a special episode of RFN recorded at the Los Angeles launch event. 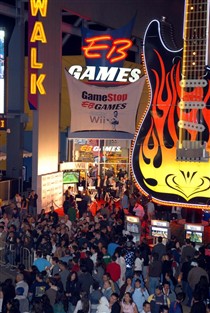 A Huge Crowd at the LA Launch Event

The Wii would continue to draw lines at stores each time it was in stock for the next two years. Though launch titles - including Twilight Princess - were not met with universal praise, the unique control method and undeniably brilliant Wii Sports grabbed the attention of the general populace.

In retrospect, 2006 proved to be Nintendo’s true turning point. After the failure of the GameCube, Nintendo had closely orchestrated and planned the release of both the DS and

Wii around the exact concepts of disruption Iwata preached in his GDC 2006 keynote. In 2007 Nintendo would hit full stride with the Wii and continue its DS world domination, releasing some of their best and most innovative titles in years.