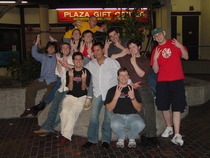 Ten years is a long time. What were you doing ten years ago? I bet it was quite different from what you're doing today. At Nintendo World Report we've bucked that trend, and we're actually doing the same thing now that we were ten years ago: consistently providing some of the best Nintendo coverage on the web. We started out small in 1999, but in the decade that's followed we've steadily grown into the site that you're reading today.To commemorate this milestone, the NWR staff has combined forces to give you a retrospective of each year we've been online.

We've chronicled our picks for Game of Year (both console and handheld), Nintendo news, and site news for every year since 1999. We're going to be rolling out one year each day until we're done, so sit back and enjoy! Be sure to click through to all the links that we've included; they tell quite a story, and are the products of our meticulous research in the NWR archives (ha!).

Here's a breakdown of the writers for each piece:

Allow us to be your hosts for this trip through time. Sit back and enjoy the ride!