2006 NWR GameCube Game of the Year

2006 NWR GameCube Game of the Year

Why Did it Win? Baten Kaitos Origins was one of very few releases for the dying GameCube in 2006. As such, its improved, streamlined battle mechanics and generally more enjoyable gameplay than the original provided GameCube owners with a very solid RPG. Its stunning visuals and sound also attributed to its victory over the runner-up, Chibi-Robo!. 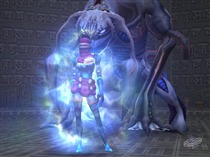 Is It Still Worthy? The title's unique card-based gameplay and gorgeous visuals still hold up today. With a thin RPG lineup currently available on Wii, Baten Kaitos Origins still stands as one of the best RPG titles on the system.