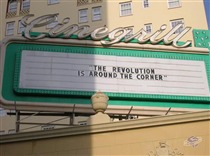 E3 2005: This sign outside the Nintendo Press Conference was truly prophetic

The year of 2005 was an exciting year to be a Nintendo fan. It was the first full year that the Nintendo DS was on shelves, and Nintendo was fully expected to release detailed information about its next-gen console - tantalizingly codenamed "Revolution" - by the end of the year. Nintendo was also expected to finally get online with the DS. 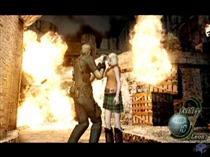 Resident Evil 4 burned up the charts

The year started with a bang. In the middle of January, The Legend of Zelda: The Minish Cap and Resident Evil 4 were released, both of which went on to win our Game of the Year awards. Although Capcom devilishly announced the end of Resident Evil 4's exclusivity on Halloween of the preceding year, GameCube owners could still be satisfied that they had played the game on the superior platform nearly a year ahead of PS2 owners.

Meanwhile, Nintendo was insisting that the DS would be a "third pillar", so in the time leading up to E3 we were looking for innovation in DS games and quite happy to try out various non-traditional games such as Yoshi's Touch & Go and Pac-Pix. Touching is Good, right? As E3 loomed, we kept buying up these simple games and just as we started to wonder about the wisdom of Nintendo's new handheld, we hit the show floor to see what the future would hold. 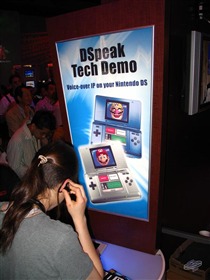 Given our mindset going in, the array of DS games on display in Nintendo's E3 booth was mind-boggling. Mario Kart DS, New Super Mario Bros., Metroid Prime Hunters, Advance Wars: Dual Strike, Castlevania: Dawn of Sorrow, Sonic Rush, Mario & Luigi: Partners in Time, Nanostray, Trauma Center, and Animal Crossing: Wild World were not only on display, but most were released by the end of the year (unfortunately, New Super Mario Bros. and Metroid Prime Hunters missed 2005). And those were just the most notable games. There were plenty of obscure titles that were interesting (and a few, such as Electroplankton, that weren't). The DS even saw a lot of use outside the convention center; despite the fact that the PGC crew had no decent multiplayer games to play, the DS saw a lot of use. We made a few attempts to play the Hunters demo via local Wi-Fi, but most of the DS action involved hilariously juvenile Pictochat sessions. 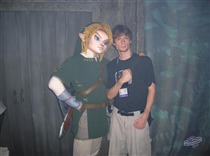 One thing that was conspicuously absent from E3 was "Revolution" controller info and hardware specs. Nintendo showed the physical body of the console and said that the machine would be two to three times more powerful than the GameCube. A few non-informative clips of character renders were shown, and information about the Virtual Console service was revealed. We were still hoping the console would support HD resolutions even if it wasn't much more powerful in terms of shading capability, but in retrospect, we should have known that there wouldn't be enough juice for HD under the hood once we saw how small it was. It just wasn't feasible for Nintendo to be so far ahead of the technical curve that the "Revolution" could be small, quiet, cool, and still be able to contain HD-capable graphics hardware. 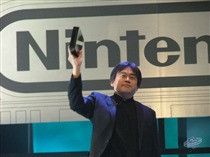 Iwata holds aloft the Revolution, screaming "I HAVE THE POWERRRR!"

On the GameBoy Advance front, Nintendo featured the Micro. They were still pushing the "three pillar" concept at this point, and did what they could to pry our attention away from the DS (including tethering the Micro demo units to the wrists of booth babes tasked with getting us to try it). That didn't change the fact that the GBA was all but dead, with the DS exploding in popularity. 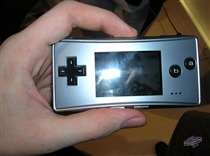 GameBoy Micro: now appearing on the side of a milk carton near you

While the Game Boy Advance managed to straggle into 2006 due to its huge install base, the GameCube seemed to be sputtering out more than a year before "Revolution" was scheduled for release. As awesome as the new Zelda looked, it was only one game, and Nintendo was notorious for suddenly adding an extra year or so to a game's development schedule. There were some notable titles, but even at the show there was a distinct lack of triple-A buzz amongst them (Geist, Killer 7, Battalion Wars, and Odama). There were also several Mario-branded party games (Baseball, Strikers, DDR and Mario Party 7). 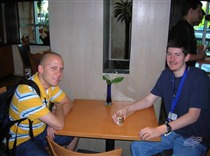 Lindy and Rize doing straight shots of vodka at 7:30am in the E3 hotel lobby

The months immediately following E3 were also quite barren in terms of good news. In June Nintendo admitted that there were "no plans" for the "Revolution" to support HD output. Three months afterwards, Zelda was officially delayed until 2006, all but confirming Resident Evil 4 as Game of the Year.

Four months after the show we finally got some good news again, as Nintendo revealed the "Revolution" controller pretty much out of nowhere at the Tokyo Game Show. This naturally caused a firestorm of commentary across the web, and we let it all out in a special edition of BLAH BLAH BLAH. 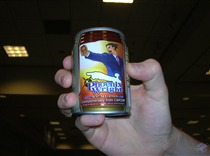 Now THAT is swag

It wasn't long until some more bad news hit. Nintendo admitted that the Wii would not be released until the second half of 2006, rather than Spring as originally promised. Hilariously, the information was revealed by a routine informational recording on Nintendo's game counseling phone system. Next they officially dispelled any rumors of HD support. In truth, neither revelation was much of a surprise. To polish off the year's "Revolution" news, Nintendo hinted that the controller still held some secrets (the speaker hadn’t been revealed yet), and that the new Zelda game would be playable with the new controller when played on the backwards compatible "Revolution". The game would indeed be playable on both the Wii and GameCube, but not in a way that any of us expected. In any case, we were probably too busy playing Mario Kart DS to care.