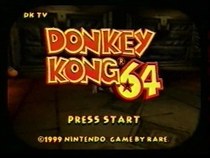 Why Would It Have Won? Donkey Kong 64 had all the ingredients of a surefire Game of the Year. It was developed by Rare, Nintendo’s second-party golden boys who at the time were at the height of their popularity. They were coming off of major successes like Goldeneye 007 and Banjo-Kazooie, had just released cult favorite Jet Force Gemini, and had mega-titles Banjo-Tooie and Perfect Dark in the pipeline. DK64 took Rare’s 3D platformer pedigree and upped the ante. It featured the iconic characters of Donkey Kong Country, a gorgeous graphics engine, a massive quest with lots to accomplish, and even a four-player multiplayer mode. It was also the first Nintendo-published game to use the Expansion Pak, a hardware plug-in bundled with the game that increased the N64’s RDRAM from 4MB to 8MB. DK64 was a fully-featured package, to say the least—it even came in a limited-edition yellow cartridge, Nintendo’s endorsement of an elite status in its software library. Its release a day before Thanksgiving further solidified it as Nintendo’s big game for Christmas of 1999.

Is It Still Worthy? In retrospect, no. As time has passed, DK64 has become synonymous with the term “collect-a-thon”. For all of its technical achievements, the game was marred by the unfortunate design choice of linking all progress in the game to the collection of bananas. Want to get up to that ledge? Find some more bananas. Want to open that door? Bananas, please. Want a new weapon? Get some fruit. This made the completion of the game a laborious process (especially since certain bananas could only be collected by certain characters, meaning that you had to constantly switch back-and-forth between them), and one that tried many a gamer’s patience. Critics have also derided it as simply a bigger version of Banjo-Kazooie, a game which walked over well-tread ground, albeit in a spectacular fashion. While remembered fondly by some, DK64 is overshadowed in the pantheon of N64 platformers by Banjo-Kazooie, Banjo-Tooie, and the legendary Super Mario 64.

NWR’s consensus is that the true Game of the Year for 1999 was Super Smash Bros. (N64). While its single-player component was limited (you could battle CPU characters in a set order, or play a target-breaking or platform-jumping mini-game), its multiplayer was (at the time) virtually unparalleled. Despite having what can now be considered a paltry twelve characters and nine stages, SSB lit up dorm rooms and kids' basements alike as everyone fell in love with its special brand of four-player mayhem. Melee and Brawl expanded upon the first game’s roster and locations, but certainly didn’t eclipse it in the fun factor department. Resident Evil 2 was a technical achievement and an excellent N64 port, but in the end it simply lacked the freshness of Nintendo’s quirky fighter.