Since no actively sold system has folders at the moment, could the Switch PLEASE buck the trend for v12?

A new version of the Switch's system software has made Switch Online more prominent and added new sharing functions.

Version 11.0 is now available for both the Switch and Switch Lite. Full patch notes can be found here, and among the highlights:

Screenshots and videos can now be transferred wirelessly... Read more...

And there's also a Runner 2 to contend with.

One of the bright lights of WiiWare is coming to another Nintendo console on Christmas Day.

The six-game BIT.TRIP series - Beat, Core, Void, Runner, Flux, and Fate - will all be released on December 25. The Switch versions are developed by Choice Provisions (the original developer renamed from Gaijin Games), and will be published by QubicGames.

Unite with the Umbral Witch.

The Wonderful 101 Remastered now has a new demo and some new characters to go with it.

The demo for the May release includes save carryover to the full game, as well as the ability to use Bayonetta as a Wonder-character from the opening of the game. Transferring save data will unlock the character in the full game, and also include a group of support items.

by Donald Theriault - 10:06 am EST
Discuss in talkback! Source: Bethesda

The other major game that debuted on March 20 is going to make 2020 on the Switch.

Doom Eternal, originally announced for Switch release at the 2018 QuakeCon, will launch on December 8 following its March 20 release on PC, PlayStation 4, and Xbox One. As with the Switch version of its predecessor,... Read more...

Well ahead of the 202...1 Olympics they were shooting for.

Super Nintendo World will open at Universal Studios in Nintendo's home city of Osaka on February 4, according to an announcement made overnight (NA time). It was originally set to open in the summer of 2020 ahead of the Summer Olympic Games in Tokyo, but both the games and the park opening were delayed due to the COVID-19 pandemic.

by Donald Theriault - 8:02 am EST
Discuss in talkback! Source: Nintendo

As if there weren't enough of the bloody things in the wild...

Nintendo has brought a Fortnite-fueled Switch bundle previously found in Europe to North America for the tail end of Black Friday madness.

The bundle retails for standard Switch MSRP, and comes with a yellow left/blue right Joy-Con controller combination and unique dock design. Fortnite comes pre-installed, and the bundle also includes 2000 V-Bucks (roughly a $20 value) as part of the "Wildcat Bundle" of cosmetics.

Ubisoft's executives apparently thought they were gods, and harassed like Zeus.

The immediately obvious headliners for this week's releases are the two Nintendo games - the Western publishing of Fitness Boxing 2 and the localization of Fire Emblem: Shadow Dragon & The Blade of Light after 30 years (and seven and a half months). We also have Ubisoft's Breath of the Wild IN... Read more...

You probably forgot this was a thing, didn't you? 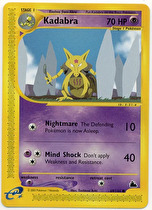 After almost two decades, a legal hurdle that kept an entire species out of the Pokemon TCG is apparently over.

Illusionary performer Uri Gellar filed injunctions against Creatures and Nintendo in the early 2000s preventing cards of Kadabra from being produced - essentially locking out its prior... Read more...

Being the longest tenured employee of a company has perks, like being able to fix stuff you shipped incomplete 24 years ago.

A week of shock game releases for Square Enix has concluded with a remaster of a PlayStation-era hit.

Saga Frontier Remastered has been announced for a Switch eShop release in summer 2021. Originally released on the PS1 in Japan in 1997 and North America the following year, the remastered title will feature new plot events and scenarios in addition to the standard graphical enhancements.

by Donald Theriault - 10:00 am EST
Discuss in talkback! Source: Taito

"It's Saturday night, I have no date. Just a 2-litre bottle of Shasta and a all-Rush mixtape. Let's rock."

In two weeks, it'll be important to shoot where the ships are going.

Taito have announced a digital release for the Space Invaders Invincible Collection as "Space Invaders Forever" on December 11, both digitally and in a limited physical run. The collection will include the following:

So is Mario retiring at the end of the fiscal year or something?

The centrepiece of Mario's 30th anniversary won't make it out of it's 35th.

Super Mario Maker, the 2015 Wii U release, will see its online services shut down on March 31, 2021. This will prevent course uploads as well as use of the Super Mario Maker bookmark website, and the game will also be removed from the Wii U eShop.

Hopefully one of the targets is a political figure who resembles Winnie the Pooh.

Hitman 3 is coming to the Switch in cloud form next year, and developer IO Interactive is showing off some of the tech that will be viewable in this version.

IO posted a trailer earlier today that showed off a new location for Agent 47's hunts, the Chinese megacity Chongqing, as well as graphical enhancements for newer consoles in the game's Glacier engine.

by Donald Theriault - 10:16 am EST
Discuss in talkback! Source: SquareEnix

After fourteen years, there will be a sequel to The World Ends With You.

Square Enix posted a countdown timer last week that led to the reveal of NEO: The World Ends With You, a Switch and PlayStation 4 game launching in Summer 2021 worldwide.

There will be four playable characters in... Read more...

by Donald Theriault - 8:00 am EST
Discuss in talkback! Source: NIntendo

We all know this week's all about the sales, but there's a couple of intriguing games too.

The Black Friday sales, which will have probably upwards of 1200 games on sale on Switch, will kick off no later than Wednesday - but if those don't tickle your fancy, there's a few options for new titles this week. The ones I'll be on include Root Double: Before Crime * After Days - a pair of visual novels that you have to solve in order to get the full story, and eventually Picross S5 from Jupiter as announced last week.

Join us Saturday, Nov 21 at 1 PM Eastern to celebrate 700 episodes of whatever the hell this is.

JOIN US THIS SATURDAY AT 1 PM EASTERN! Here's the link! The Discord where we will be chatting is here.

Here's how to read this in the timezone of your choice.

Okay, that's the Inverted Pyramid satisfied, so what are you doing?

Radio Free Nintendo is excited to hit our 700th episode, and... Read more...

Tonight at 11, your microSD cards are DOOOOOOOOOOOOMED.

We don't know when Doom Eternal will come to Switch yet, but it won't be landing in stores.

In a statement to IGN, Bethesda have confirmed that the Switch version of Doom Eternal would launch digitally only. This follows the cancellation of preorders for the physical release by GameStop, among other retailers. 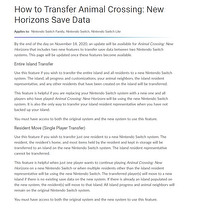 The promised camera inversion patch for Super Mario 3D All-Stars has brought another oft-requested feature along with it.

Version 1.1.0 of 3D All-Stars has added support for GameCube controllers in Super Mario Sunshine. The support for the 'Cube controller adapter will only be available in docked mode, and the screen prompts will continue to indicate the Switch buttons.