Other Announcements From The December 15 Indie World

This should keep you going for almost the entire year. 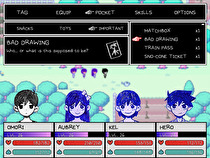 Today's Indie World presentation featured a host of new game announcements and a couple of updates for titles as well. The "one more thing" of the presentation was psychological horror RPG Omori, which is slated for release on Switch in the spring. Based on the webcomic of the same name, Omori (short for the Japanese term hikikomori, roughly meaning "shut-in") has multiple endings and status effects based on the main character's emotional state.

Other announcements, in order of release window: