The ability to download full games will be available at Wii U launch. 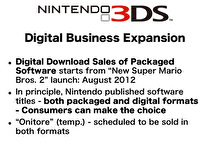 New Super Mario Bros. 2 won't just be coming to retail stores in August, it will also be coming to the eShop as a download. Additionally, the ability to download full games will be available at the launch of the Wii U. The news came out of Nintendo's end-of-the-year investors' meeting in Japan.

Onitore, the new Brain Age game, will also be sold in both formats and is expected to release in Japan this summer. It will come out in other regions later.

Part of the logic behind this move, according to Nintendo's Satoru Iwata, is that game life is getting shorter, and this offers a place for games to be available past their retail shelf life. Retail stores will also sell download codes, and as such, Iwata doesn't expect a big price disparity between retail and download.

Wii U will be out worldwide by the end of 2012, and according to the same report, price details won't be announced at E3 2012.

New Super Mario Bros. 2, revealed last week, is scheduled for an August release. We reported earlier today that it seemed like Nintendo would be offering full retail releases soon, and it looks like they are.

This is great. The ability to download full games on my 3DS means less cards to carry around. That's one thing I like about iPhone games.

NSMB continued to sell for years after release, I have no doubt this one would to. Smart idea though.

Bonus: Downloaded copies can't be resold.  Should help the sales of this title.

If it has a Mario vs. Luigi mode that rocks as much as the original, I'll buy both versions, no questions asked.

Hell, if they released the Mario vs. Luigi mode from the original as an eShop download at $30, I'd buy it just so I could stop carrying my cart with me EVERYWHERE.

I'm...weeping with joy. Like the Vita, we'll see if this means wildly different prices for games.

Guess I'll be buying a bigger SD card sooner than later. At least I get to save time putting in those Club Nintendo codes.

I wonder if this digital library will include games released in the last six months, or last six years? It would be neat to be able to buy GTA IV, Dead Space 2 and the Mass Effect trilogy on launch day for the Wii U. I might even pick up Batman: Arkham City and Ninja Gaiden 3 as digital games, and maybe even Operation Racoon City if it appears on the store.

I was thinking the same after I read this.

If all of this is true everyone may wanna invest in a 32 GB SD card, (or higher), for their 3DS.

It will probably feel quite inadequate pretty soon.

I have an 8GB SD card in my DSi and I have used up about 4GB of it with just music. That does not include podcasts and games. It makes me shutter at how much space all these games will take up.

It will probably feel quite inadequate pretty soon.

If all of this is true everyone may wanna invest in a 32 GB SD card, (or higher), for their 3DS.

Well, not higher.  The 3DS currently only supports a maximum of 32 gigs.  And if you calculate the size of each game as being anywhere between 2 and 4 gigs (let's just say 3 to split the difference) and assuming that you have absolutely no eshop games, VC, or videos, then you can only fit 10 games at any given time.

There actually SD cards that go above 32GBs and they are called "SDXC." They are relatively new and go from the minimum of 32GB to 1TB(terebyte). The best part is that the drive for these cards are backwards compatible with the older versions of SD cards. I would not be surprised if the Wii U and 3DS Lite are compatible with these newer SD cards.

I've heard from NeoGaf and GameFAQs that they do, in fact, work.

Nintendo games, especially of the Mario variety, tend to have a really long shelf life.

I'll stick with the retail version but this is a good thing for people who want the download option.

People tend to steal Mario and Zelda games often, so it might be a good idea to have them stored out of sight on a console.

Who steals Mario and Zelda games? I just find that hard to believe.

I will almost certainly be buying it this way. One of the big appeals of the PS Vita to me is the fact that every game is available digitally, and I'm glad Nintendo is also starting to offer the option, at least for some games.

Between this and the recent 3DS update, I'm pretty impressed by the growth Nintendo's showing in terms of online functionality. Granted, some of it should have been done a long time ago, but better late than never. I'm becoming more and more optimistic about what we're going to see with the Wii U.

A friend of mine had a girlfriend and her brother cleaned out his Mario and Zelda collection while he was gone.

Wow. That's...just about the lowest of the low. I could understand HD console games, but Nintendo? Have they no soul? :P

Wow. That's...just about the lowest of the low. I could understand HD console games, but Nintendo? Have they no soul? :P:


I had my DS Phat and all of its games along with about ten GBA games stolen from me once.

Jeez, people. The only Nintendo thing ever stolen from me was Pokemon Crystal version. My first video game. :(

When I was in 10th grade, I was visiting a friend in their high school shop class (my teacher let me leave early). I left my bookbag alone for like 3 minutes, but someone stole my GBA SP along with several GBC and GBA games like (like Pokemon Ruby, WarioWare, Inc., and I think my copy of Pokemon Crystal that had over 600 hours logged on it).

So, I guess this means the Wii U will either have a hard drive or fairly large solid state storage.

Who am I kidding? CLEAN OUT YO FRIDGE 2: Digital Bugaloo

Well, considering it will probably be mostly flash storage...invest in a really nice SD card?

Well, considering it will probably be mostly flash storage...invest in a really nice SD card?

I doubt Nintendo would go the route of SD card storage only, especially with this digital service. At the bare minimum I'd think the Wii U could support some sort of HDD, even if the "out of box" hardware happens to be flash. But then again, it is Nintendo, so who knows.

At the very least, have 16 GB of flash memory, with ability to expand that by allowing USB external HDD and SD slot(s). That would be the most ideal in my book.

At the very least, have 16 GB of flash memory, with ability to expand that by allowing USB external HDD and SD slot(s). That would be the most ideal in my book.

16GB sounds fair out of the box since I'd think at the bare minimum they would have enough memory for a couple average sized retail games. I just hope they don't pull a Microsoft if they go with HDDs, and instead go the Sony route of allowing standard HDDs.

Doesn't Microsoft force you to by their brand of HDD's at a premium? I know that Sony allows you to install your own and even comes with instructions on how to do so.

I wish they would give you a digital copy for buying the physical media.

It was announced at last year's E3 that the system will support USB hard drives.

If the Wii U does support internal HDD then Nintendo will not provide the hard drive itself. They will simply tell the consumer what HDD it uses (2.5 SATA) and expect us to provide it for ourselves since there are so many on the market to buy cheaply.

The memory will be easy to change with a regular HDD and people will have enough space for all of those digital downloads they want...  That could work.

Mario games tend to stay pretty expensive, so this would definitely be worth a download. Some other games would be worth getting at retail, however, as they can go down in price, whilst the eShop can't/won't.

Doesn't Microsoft force you to by their brand of HDD's at a premium? I know that Sony allows you to install your own and even comes with instructions on how to do so.

I remember reading that the original 360's HDD is pretty much just a standard HDD within that large shell over it and that you can take it apart and put your own in there but it needs to be in the shell because the port is proprietary. Don't take my word for it because I can't support the validity of that claim. However, I know for sure that the slim 360 uses a regular HDD housed in a plastic shell but you can just plug a regular HDD in there without the shell since it uses standard SATA (unless you insist on removing the shell and putting it on the new HDD yourself so it looks nice). You just have to format the HDD first.

My guess is that if Nintendo supports regular HDDs in addition to USB HDDs, they go with a similar method as the slim 360. They'll sell their own overpriced HDDs but you can buy your own and you'll just have to format it and all that yourself.