RollerCoaster Tycoon 3D Might Be Coming Out in Three Weeks

In the past week, this n-Space-developed game has been on hold, delayed until May, and now, possibly hitting shelves in March. 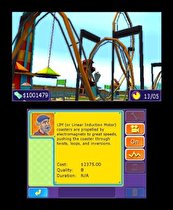 RollerCoaster Tycoon 3D, published by Atari and developed by n-Space, is due out on March 13, according to a Nintendo release list.

The saga of this game has gotten quite confusing. It was initially announced last year, slated for an early 2012 release. A few weeks ago, we confirmed with Atari that the game was on hold. Then, last week, it was listed for a May 22 release on various retailer sites.

While retailers still list it as a May release, the aforementioned Nintendo release list, which popped up on their web site yesterday, lists a March 13 release.

We've contacted Atari to get a straight answer about the game's release, and will update this article if/when we get a response.

Thanks to Snowyday for the tip!

I hope it does come out soon.

One might almost say the ups and downs of this release date story have been rather like a ...rollercoatser...

n-Space confirmed that the game is done and approved by Nintendo, so Atari could release it today if they wanted. I am not sure I will get the game (I loved the original PC game and the Corkscrew Follies expansion pack), I guess I will wait for reviews. I loved the expansion pack because I could put a "No Exit" sign by the entrance and trap people inside. LOL

I've barely seen any pictures or any videos at all. Can it really be coming out in 3 weeks? Is this game a secret?