RollerCoaster Tycoon 3D Official Release Date 'Yet To Be Announced'

The game has been done for months according to the developer, but who knows when it will actually come out. 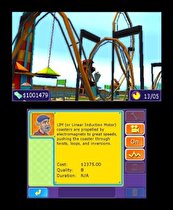 UPDATE 5/7/12: An Atari rep responded to us, saying "the official launch date has yet to be announced." The original story follows below:

RollerCoaster Tycoon 3D is getting pushed back another month to June 19, according to GameStop.

The game was last set for a May 22 date according to retailers, and a late spring release according to publisher Atari. Before that, it was announced for an early 2012 date.

Developer n-Space confirmed in February that the game is complete and finished. The company is currently finishing up Heroes of Ruin with Square Enix, which is due out on June 26.

We have reached out to Atari for confirmation.

Thanks to Snowyday for the tip!

Question: Is anyone excited for this?

I'm interested in it, though things like the Nintendo Power review (I believe they gave it a 5.5 or something) make me worried.

I'll be picking it up.  Never played any of the games, so I'm not sure how I'll feel about it - but I do like n-Space's work. :D

I'll be picking it up like UncleBob. I've never actually tried the Rollercoaster Tycoon series before despite being a big fan of Theme Park (I own Theme Park on the DS!), but after this 3DS version popped up on my radar I've been set on finally giving the franchise a spin.

Now if only there was a Dinopark Tycoon revival...

I was pretty excited, but the repeated delays made me less so, and I just bought RollerCoaster Tycoon 2 for PC on Good Old Games the other day. At this point, it'll have to get pretty good reviews for me to care.