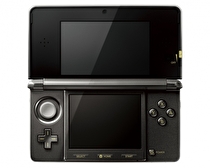 Nintendo of Europe has revealed a special 3DS bundle for the 25th Anniversary of The Legend of Zelda.

The bundle, called The Legend of Zelda 25th Anniversary Limited Edition Nintendo 3DS, offers a Cosmic Black version of the system with Hyrulian logos, borders and color schemes all spread across. They go as far as adding the color scheme to the 3D depth slider and the touch buttons. The package also comes with a copy of The Legend of Zelda: Ocarina of Time 3D, which here uses the American box art instead of the fancy European one.

The Zelda 25th Anniversary Nintendo 3DS is scheduled for release on November 25.

Yeah, but will the people who buy this get NES Open Tournament Golf and Balloon Fight for free? I don't think so! #Ambassador4Life #HashtaggingOutsideOfTwitter

FFffuuuu!!
It doesn't look that good. The whole buttons should be gold.

I think it looks good but I also think its a real missed opportunity to not put the 25th Anniversary logo in the dead space under the buttons.

I hate you Nintendo of America! I hate you!

I don't think it looks very good either, it's just the black system with some gold trimmings. If it were all gold, that would be something.

I like it a lot more this way than if it were all gold.  This looks slick.