The Legend of Zelda Room

Nintendo opens a window to the land of Link in Redwood City. 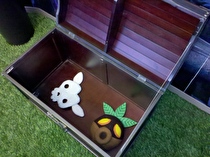 Last year, Nintendo had i-am-8-bit come to their Redwood City offices to decorate their game demo room with a Kirby's Epic Yarn motif. A year later, the felt was feeling the force of gravity and the room was beginning to droop.

With the launch of The Legend of Zelda: Skyward Sword and the series' 25th anniversary, Nintendo had i-am-8-bit return to redecorate. The result is a mix of spectacular whole-wall paintings depicting day and night scenes and three dimensional crafts, such as potions, fairies in bottles, and a mask-filled chest. How would you like some stuffed rupees to accessorize your couch? They even covered the floor with artificial turf! Check out their handiwork in the gallery below.

why doesnt the moon look evil in every zelda game, i love the evil moon