Players will not have to shake the control to the rhythm in this latest iteration of Rhythm Heaven. 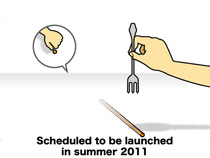 Rhythm Heaven Wii (known as Rhythm Paradise in Japan) will be playable only with buttons, not with motion controls, according to Nintendo President Satoru Iwata at today's Financial Results Briefing.

Nintendo did not previously confirm how the game, which was revealed in January, would control up until this point. Iwata explained that "We have sharpened such different attraction of both titles that we believe that you can have a totally different kind of fun."

The concept behind the Rhythm Heaven games is that players participate in events in which their rhythm and timing skills are tested. While the series has been around for years in Japan, debuting on Game Boy Advance, North America received Rhythm Heaven for the DS in 2009.

Rhythm Heaven Wii has been set for a summer release in Japan. There is no word on whether or not the game will be released overseas.

I should hope so too! This suggests that the key new feature of this one will be local multiplayer.

Needless to say, I would be sad if this didn't make it to the West. That's probably down to how well Rhythm Heaven DS sold over here - I think it did okay, and it's not like this game would take much to localise.


Something, something I suppose.


That first level in Rhythm Heaven where you ping the rods is so satisfying and the soundtrack is exactly perfect (really, my only criticism is that it's too short). Wasn't so keen on some of the later levels. Not sure if the game wasn't as responsive as it needed to be or if it was just me (probably me). Looking forward to see what they do with the Wii version. No need for any fancy graphics, just good ol' rhythm fun. Great news about the button control, it's way more precise than waggle, although, could you imagine 5 years ago the idea of a rhythm game coming out on Wii and not using motion? Sometimes thinking about the Wii and how failed to deliver makes me sad... like how rapture ended up in Bioshock.... welp, drunk post FTW!

I'm just glad to hear something about this game since there has been no word of it ever since its announcement (that I recall). I'm hoping for a US release announced at E3.

No surprise to me.  For a game like Rhythm Heaven, you need to be able to match the beats at the exact moment.  Now taping the DS touchscreen allows you to do this, but usinging some type of motion with the Wiimote would be impossible because even the slightest delay would make the game almost impossible to play.

I didn't think the DS version did so well... It seemed like it quickly dropped to $20-$15-$10.  The biggest thing in our favor is the lack of other Wii titles to release.