The title aims to train memory and concentration. 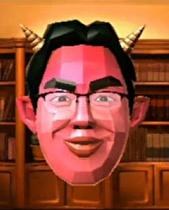 Oni Training (or "Demon Training"), the newest title in the Brain Age series, was revealed by Nintendo President Satoru Iwata during Nintendo Direct.

The game is a spin-off of Dr. Ryuta Kawashima's Brain Age for 3DS, focusing on training the players memory and concentration. It features a demon version of Kawashima. Iwata said that the game attempts to give players a serious challenge while avoiding frustration.

Nintendo plans on revealing the final title of Oni Training, as well as other details, at a later date. It is currently set for a summer release.

I hope they don't expect people to pay retail release prices for this. It needs to be a download title.

I hope they change the character and title for localization, because in NA, Demon brain training is not going to sell to the masses of people like the original did.


I don't mind the name but the character design is just stupid...and I don't want to see a floating demon head telling me my brain age.

Outwitting the devil sounds fun though...