Ocarina of Time 3D to Include Master Quest

A Nintendo representative spills the news on Ocarina of Time's alternate quest. 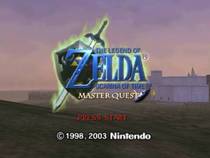 The Legend of Zelda: Ocarina of Time 3D will include the Master Quest version of the game in addition to the original title.

In a video interview conducted by Conservative New Media, Associate Public Relations Manager at Nintendo of America David Young detailed some of the new enhancements in the upcoming Nintendo 3DS title. While he mentioned the touch screen enabled menu systems, he also confirmed that the title will also include the Master Quest version of the title, first released as a pre-order bonus in 2003 for Wind Waker on the GameCube. The Master Quest edition features new puzzles for players to discover.

The Legend of Zelda: Ocarina of Time 3D is set to be released sometime in June.

It also features cows sticking out of walls.

I hope they also add in a few extras for those that have played OoT & MQ to death already.

A new dungeon or two and a few extra side quest would also make me consider trying this game out again in 3D.

Interesting. I never played the Master Quest version of the game.

It also features cows sticking out of walls.

I didn't think they would do it. Hopefully they add some more stuff.

Technically, no. But the dungeons were changed around for the Master Quest version. It also feature 1 or 2 new enemies.

I'm wicked psyched for this game because I'm one of the lucky few whose only played it once to completion when it launched 13 years ago! I've forgotten so much of the game that it's gonna be a practically brand new experience for me, and for that I cannot wait! The Master Quest is just icing on this delicious rum cake.

Technically, no. But the dungeons were changed around for the Master Quest version. It also feature 1 or 2 new enemies.

It all depends on how you look at it-- the dungeons are all in the same locations, have the same map layouts, and same bosses. But the enemies, puzzles, locked doors, and pretty much everything else that effects the way you play through the stage are significantly different. Therefore, describing them as "new" could hardly be considered inaccurate.

As far as new enemies go, I don't know what you're talking about. There aren't ANY new enemies in MQ... that is unless you mean old enemies in new places... but even then there are A LOT more than 1 or 2.

That's a nice bonus. I still haven't played the Master Quest version, and I may not ever, since the GCN disc costs more than I'd be willing to pay, and I have no interest in the 3DS.

This still isn't a deal breaker to me, like many others have said the ability to aim by moving the system won't impress me enough for me to run out and buy them, playing it in 3D would be nice but I've already played through both and figured out the in's and out's of each game to death. The added depth from the hand-held unit would add nothing to the game play since I'd be at home playing it most of the time any way >_>. Now if they added more bonuses the the getting the cow into your house as an adult I'd be psyched but at the moment... It'd be a buy if I could afford it with the unit when I end up buying one... Not a killer app >_>

Umm... it's been awhile since I played MasterQuest, but I'm pretty sure the dungeons had completely different interior maps...

OK, it is decided then, time to sell my special edition OOT game with the Master Quest for GC!

That's cool that Master Quest has in a way become an official part of the game.  If they were cool they would make it accessible by entering "Zelda" as your name.

I remember being so thrilled to get the Master Quest for pre-ordering Wind Waker.  Then I got home, played through the Deku Tree, and that was it.  Having remixed dungeons wasn't new enough for it to grab my interest.  But at that point it had not been that long since I had played OoT.  Now so many years later I probably would get more out of replay so the Master Quest would be the way to go.