Pokémon: Lucario and the Mystery of Mew

Lucario acts just like Mewtwo. Does that make him Mewthree? 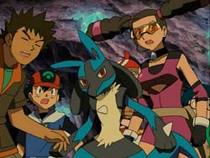 While marketed as part of Advanced Battle, the third season of Pokémon's second animated series, the 8th Pokémon movie takes place immediately after Ash returns home from Hoenn, placing the setting town of Rota in the Kanto region, and making it part of the Battle Frontier continuity.

In commemoration of Ash returning to Kanto and embarking on another journey in the region where it all began, this movie also features the return of Mew, the first legendary Pokémon to be showcased in a movie. It also heavily focused on Lucario, marking the first movie in a long time to reveal a Pokémon from an upcoming generation of games - as it was not obtainable on Game Boy Advance.

Somewhere north of Mount Moon is a castle town with a rich history of a great kingdom, an epic battle waged over the land and a hero named Sir Aaron who protected his queen in a time of crisis. In present times, the town holds an annual festival to celebrate the ancient traditions of the kingdom and a Pokémon battle tournament  in honor of the legendary hero. In a nearby valley is the great Tree of Beginning, which is said to be the source of all natural life for the area. 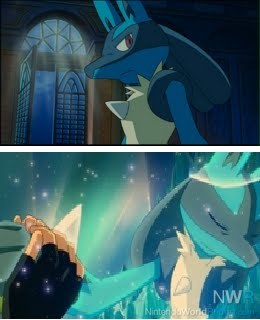 Prepare for a lot of Pokéangst in this movie

Movie 8 follows the story of Pikachu getting mistakenly abducted by Mew (allegedly a different Mew to the one in the first movie) and taken to the Tree of Beginning. Ash and his friends team up with Lucario - a recently-awoken partner of Sir Aaron who was sealed in time, and head to the tree to retrieve him. Lucario feels betrayed and abandoned that his old friend sealed him until the present time, and never misses an opportunity to comment on the futility of friendships between humans and Pokémon. He acts all brooding and tough, but his whining quickly becomes grating - he really puts the emo in PokEMOn.

In the games, Lucario could not be obtained until Generation IV, Diamond and Pearl. Only one of them is given to the player in these games, in the form of a Riolu that must be evolved through happiness. It could, however, be bred to obtain another Riolu. 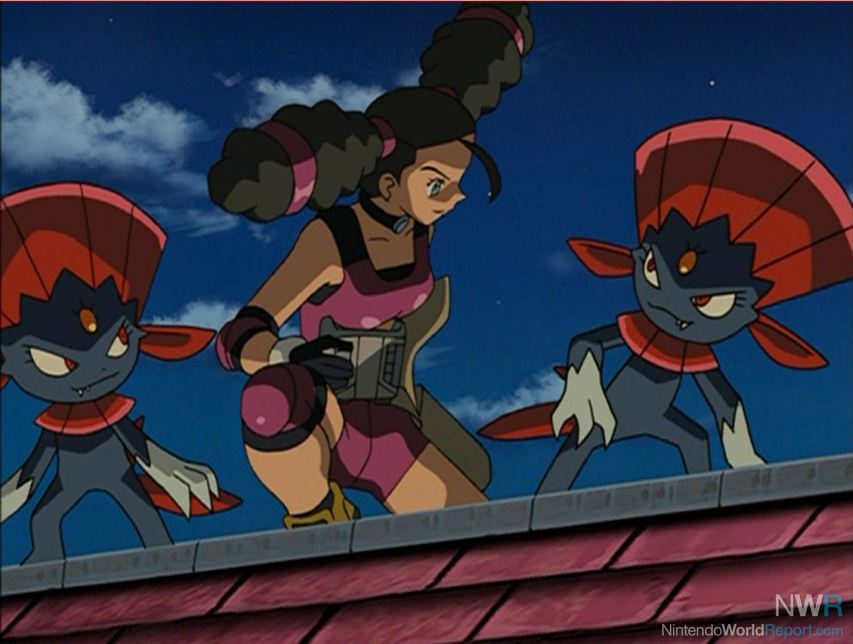 Silly hairdo and all, she is still pretty badass

Anyway, the Tree of Beginning is a sacred place for both Pokémon and nature, and it is kept safe from human invasion by its three guardians, Regirock, Regice, and Registeel (#377-380, respectively). These gargantuan guardian goliaths are relentless in their pursuit and attack of any humans who go anywhere near the valley, and the movie adaption of them is extremely cool. Even the sounds they make are ominous and intimidating.

In the games of Ruby, Sapphire and Emerald, the three Regi- Pokémon are obtained after deciphering an interesting puzzle in a ruin chamber, written in the real-world language of Braille. This was the first time a new language had to be learned and translated to unlock game content in the series (unless you count reading Unown), and the games came packaged with an alphabetical Braille chart to help players translate. After solving the ruin's puzzle, three hidden caves appeared around the Hoenn region which contained one of the legendary Pokémon each. 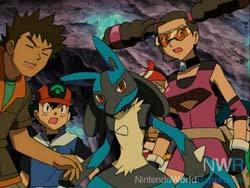 Ash and friends face their biggest threat yet

Back to the movie - after Ash reunites with Pikachu within a network of caverns beneath the Tree of Beginning, Lucario finds the preserved body of his old companion Sir Aaron sealed within the tree's core. It is revealed that the ancient battle for the kingdom had ravaged the land and doomed the tree, and as the only mage in the kingdom he had sacrificed his aura - his spiritual power and life force - to revive the tree and keep the land alive. Knowing that Lucario would have come too, Aaron had sealed him to prevent his sacrifice so that he may continue to live out his life in happiness.

Lucario and the Mystery of Mew is actually one of the best stories in the series of movies, and if one can overlook Lucario's obnoxious attitude there's a lot to enjoy. It's also the final movie to be dubbed by the original cast members from 4Kids Entertainment, who around this time had lost their license to publish animations based on Nintendo franchises, including F-Zero and Kirby.

As part of the transition to the new company, the American DVD of this movie came bundled with the American-made special, Mastermind of the Mirage Pokémon, a double-length episode to celebrate the 10th anniversary of the original Pokémon game on Game Boy. The contrast between the voices is made all the more glaring when paired back to back with the Lucario film, and the quirky animation and questionable story of the special render it largely forgettable.

Nonetheless, the main feature presentation is a worthy addition to the series and worth checking out.

Pokémon Ranger and the Temple of the Sea Pokémon: Destiny Deoxys