Andrew must endure all of these movies at once. It is his destiny. 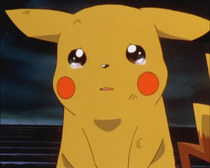 The first movie plot focuses around the creation of Mewtwo, Pokémon #150 and the hardest legendary to capture in the Kanto region of Red, Blue, and Yellow. He was cloned in a Team Rocket laboratory using fossilized DNA of Mew, #151.

By the time this movie hit cinemas in the west, the sequel had already been out in Japan for almost four months, and given the runaway popularity of the show stateside, mentioning that it was the first of many movies in the title was a no-brainer. This film had the most continuity tie-ins with the series out of the whole lot of them, from several direct references and Mewtwo appearances in the show itself, to several flashbacks of series events within the opening of the film. There was also a connection to a CD drama (sort of like a read-along storybook but cooler) released only in Japan called The Birth of Mewtwo. 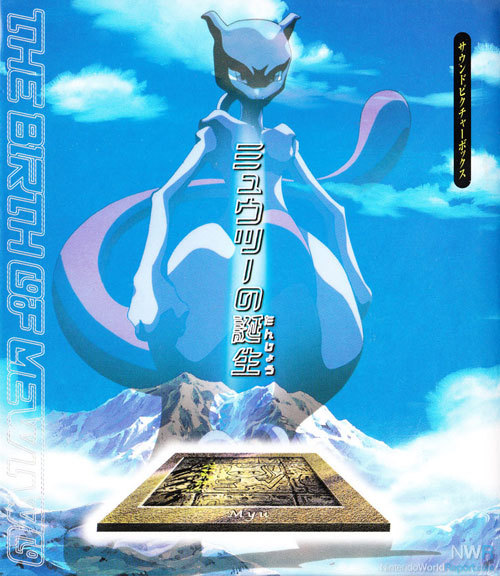 The CD that started it all...

The CD spoke of the origins of Team Rocket and their most elite agent (who happened to be the mother of Jessie in the series) who led an expedition searching for the legendary Mew. Upon locating her target, she was engulfed in an avalanche and vanished, and Mew was thought to be extinct. Years later, Giovanni, the new head of Team Rocket and the 8th Kanto Gym Leader, attempts to clone Mew using a discovered fossil, and we hear the story of the lead scientist on the project, who is going along with the evil plan so he can figure out how to bring his dead daughter back to life. Mewtwo awakens for the first time and makes friends with the little girl and the other Pokémon clones in the lab. He begins to learn about life, birth, creation and happiness before the other clones' cellular structure fails and they pass away, leaving him all alone, traumatized and hating humanity. Grim. Some of this story was animated and partially shown before the beginning of the theatrical movie, and the full featurette was included on the DVD of the special episode “Mewtwo Returns” a few years later.

Cue the beginning of the film. Mewtwo awakens in the laboratory a few years after the events in the origin CD, the only clone to survive up until now. Whilst coming to terms with his test-tube birth, Mewtwo decides that humans are all inherently evil for meddling with the creation of life and blows up the lab along with everyone inside.

After being found, used and betrayed by Giovanni, Mewtwo flees to the ocean and builds an island fortress, where he lures unsuspecting trainers to come compete in a battle tournament with the “World's Greatest Pokémon Master.” Here he plans to gather the best Pokémon for himself while he destroys the rest of the world, ruling over his hand-picked society as their god.

Meanwhile, Ash Ketchum has just earned his final badge to qualify for the Pokémon League at the Indigo Plateau, and is training in preparation for the event when he gets an invitation to Mewtwo's competition.

Eager for a new challenge, he and his friends jump at the chance to partake in the Poké-party. 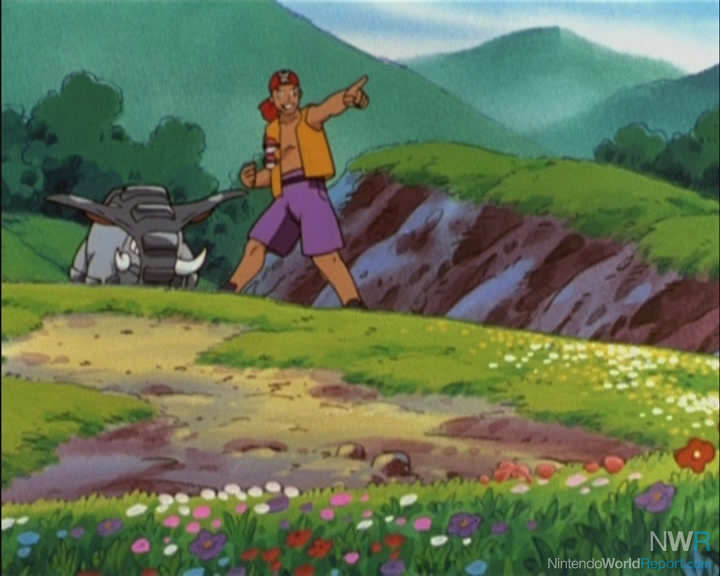 The first appearance of Donphan

On the island, Ash and friends are doing a meet and greet with other invited trainers when Mewtwo reveals himself and explains his plan to the trainers.

Meanwhile, Team Rocket agents Jessie, James and Meowth have snuck ashore and stumble upon a laboratory full of stasis tanks containing Poké-clones, where they accidentally hit a power switch. Watching in horror, a mechanical claw grabs Meowth and drags him through the copier. As MeowthTwo joins the other clones in its own tank tube, a screen flickers to life, showing the recorded cloning of Mew and subsequent destruction of the original laboratory site, explaining that this lab is in fact the same laboratory, rebuilt and restored to its original working order. Unbeknownst to Team Rocket, the original Mew is in fact alive and has been following them for some time.

Up above, the trainers naturally object to Mewtwo ruling the world and attempt to battle him. Thoroughly defeating them, Mewtwo dramatically abducts everyone's Pokémon and sends them down a tube to his underground facility to make more clones for his army.

After a lengthy chase sequence between Pikachu and Mewtwo's flying, psychic, evil PokéBalls, Ash, having followed the stolen Pokémon, lays waste to the cloning machine. Suddenly the clones awaken en masse and wander out of the lab to join their master. Ash collects up the stolen Pokémon and heads topside for a showdown with Mewtwo.

During the confrontation, Mew appears, and Mewtwo viciously attacks it to prove that he, the enhanced clone, is superior. Mew retorts that a Pokémon's real strength is not determined by the way it was born. Intrigued by the prospect of pitting Pokémon originals against their clone counterparts in an even match, Mewtwo mentally suppresses all of their special abilities and powers, and thus begins a mass-melee of butting, biting, scratching, and clawing. The humans all watch in disgust as the Pokémon tear into each other, evenly matched and gaining nothing but hurt. Unable to take any more, Ash runs onto the battlefield in an attempt to intervene and gets promptly blasted by an energy collision from both Mew and Mewtwo. He turns to stone and drops to the floor, and a devastated Pikachu rushes to his side. Pikachu tries reviving him with its Thundershock attack, but to no avail. 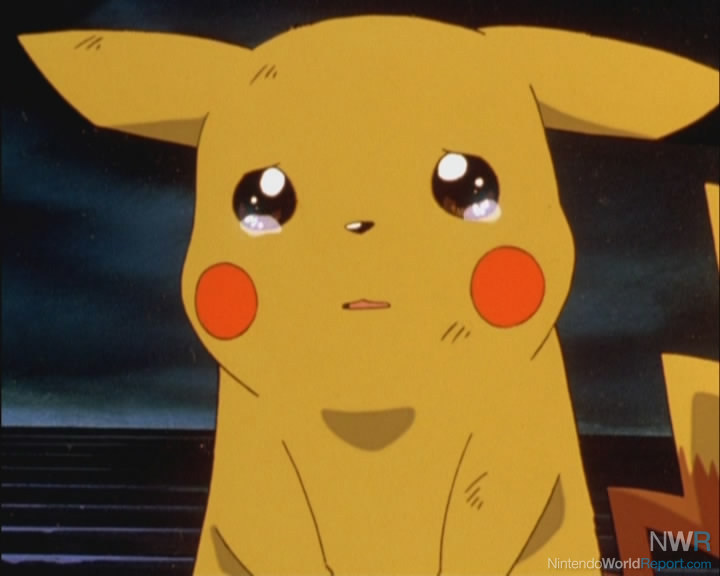 Finally, in one of the cheesiest cop-outs in movie-writing history, the Pokémon all begin to cry. Their tears collect and fly into the stony corpse, reviving him. Yeah. They went there.

After the sappy reunion, Mewtwo is enlightened to the bond that can be shared between Pokémon and their trainers. He decides to let everyone go while he takes his clones far away to start a new life together, but first erases their collective memories of himself and the island, thus erasing the valuable lesson everyone learned about violence. Huh.
As everyone appears back on the mainland, surprisingly refreshed and oblivious to the fact that they somehow missed a whole day, Ash sees Mew disappearing into the clouds, and becomes fired up for his upcoming Indigo League challenge.

Overall, the movie is fairly bland. For the first appearance of the show's cast on the big screen, it's not a bad outing but it's full of cliches, and the revival scene is cheesy beyond belief.

There's also the fact that a lot of the story was changed for the English release, heavily pushing an anti-fighting, anti-racism message. Almost every line of dialogue during the big fight at the end was altered to press one over-used moral after another. Also, in the original version Mewtwo is more of a confused creature believing he will not be accepted in society, rather than a heartless villain bent on world domination. This personality was remedied and in the later special, Mewtwo Returns, he follows his original character much more closely.

Nonetheless, this film set the standard for many of the following films, and could have done much worse. Fans of Pokémon owe it to themselves to see it at least once.

Included with the first movie, this short feature shows Pikachu and the rest of the heroes' Pokémon being dropped off for the day at a kind of theme park for Pokémon, for a much-needed vacation after all the relentless battling their oppressive masters have put them through.

It showcases for the very first time (at the time, anyway) a few Pokémon from the upcoming Generation II games of Gold and Silver, to help generate hype and speculation.

G/S Pokémon had already been introduced into the series – some 20 episodes before the movie takes place, the heroes come across an egg and hatch Togepi (#175), and in the very first episode, Ash saw the legendary Ho-Oh (#250) flying off into the distance. But this special also teased us with a few more critters in the form of Snubbull - Pokémon #209, and Marill - #183, who had been leaked onto the internet months before and was widely rumored to be named “Pikablue” until then.

On their day off, the Pokémon attempt to calm down the crying infant Togepi but are repeatedly disrupted by a gang of bully monsters. Eventually, a rivalry breaks out between the two groups and a series of sporting competitions around the park ensues. Things get more heated until Ash's Charizard manages to get its head stuck inside a climbing gym. The groups put aside their argument and work together to free the giant lizard, and they all play happily for the rest of the day.

It's mostly cutesy fluff but there are a few genuinely funny moments and it's interesting to see how the Pokémon interact and take on their own personalities when the humans aren't around. Beware the acid trip scene transitions featuring echoing Pokémon voices and tie-dye backgrounds!