In order to avoid a lot of explanation, here is the cast list.

Ash Ketchum – Modeled after the player's sprite in the original Red and Blue games. He sets out on a journey as all Pokémon Trainers do: to become an elite known as a Pokémon Master. Over-excited and unable to go to bed the night before, he slept in until 4 p.m. on the day he was meant to begin his Kanto journey, and thus missed out on all the starting Pokémon. Professor Oak instead gave him a leftover Pikachu and after a bumpy start, the two have become inseparable. He's known for being cocky while inexperienced and generally inept, but also relentlessly determined to be the best and do the right thing.

In the original Japanese series, he was named Satoshi, after the producer of the Pokémon games.

Brock – The first Kanto Gym Leader. He decides to follow Ash on his journey, seeing it as an opportunity to work towards his goal of becoming a master of breeding champion Pokémon. Usually the most mature and reliable member of the team, though he loses it whenever a hot girl is nearby. He is known to use Rock-type Pokémon. 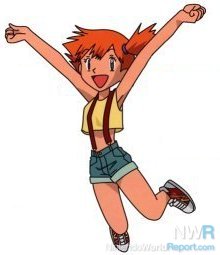 Misty – The second Kanto Gym Leader. In the first episode, Pikachu inadvertently roasts her bicycle to a crisp and she follows Ash out of spite until he can repay her. Somewhere along the line she forgives and forgets, but she's still hotheaded enough to start arguments over trivial things. She is obsessively fixated with Water-type Pokémon. 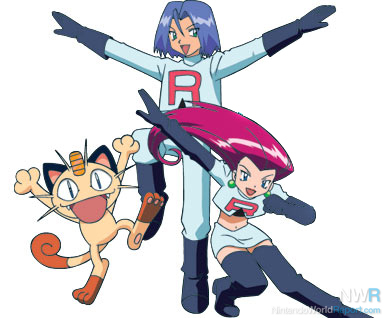 Team Rocket – A trio of villains who follow the heroes around and frequently try to steal their, or other Trainers', Pokémon. Bumbling minions of the evil syndicate in the Red/Blue games, Jessie, James and their talking Poké-cohort Meowth are mostly comic relief. They've convinced themselves that Ash's Pikachu has an exceptionally high power level, and that giving it to their boss will earn them promotions and respect. They have an affinity for over-dramatic, rhyming introduction speeches, fashion flair (they have custom white uniforms as opposed to Team Rocket's usually black outfit) and Poison-type Pokémon. These unique Rocket members appeared in multiple special appearances in Pokémon Yellow on Game Boy.

Tracey Sketchit – He joins the heroes, replacing Brock for the final stretch of the original Kanto series. A “Pokémon Watcher” who has dedicated himself to the study of all Pokémon, researching their habitats and growth. He also draws every new monster he sees on sight, occasionally stopping to sketch portraits of pretty girls instead. Masamitsu Hikada, the former director of the TV show, stated that he was created for fears that non-Japanese viewers would consider Brock to be a racial stereotype due to his eyes and skin tone. Tracey was then drawn intentionally as a wide-eyed caucasian character. 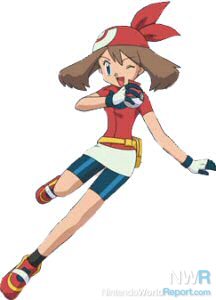 May and Max – As the second series, Pokémon Advanced, kicks off, May starts out her Pokémon journey in the region of Hoenn. She soon bumps into Ash, who had finished his travels in the Johto region and left his friends Misty and Brock behind. Originally stating that she actually disliked Pokémon and that she only wanted to travel and see the world, she quickly discovers the existence of Pokémon Contests (kind of like fashion shows first seen in the Game Boy Advance series) and becomes a Coordinator.

Max, her geeky younger brother and know-it-all, meets up with the group at their hometown of Petalburg and decides to tag along to learn more about training Pokémon. They are the children of Norman, the 5th Hoenn Gym Leader, and accompany Ash during all three seasons of the second series.

Dawn – As May replaced Misty in series two, Dawn in turn replaced May in the third series of Diamond & Pearl. Ash has recently revisited his home-region of Kanto for a mini-saga between series, based around the Battle Frontier of Pokémon Emerald for GBA, and heads to the Sinnoh region for his next big quest. Like May, Dawn is a Pokémon Coordinator and evens out the adventure and battle side of the series with her own contest-focused episodes, showing the Pokémon world in new light. Dawn was originally planned to replace Ash as the main character of the series, but instead simply accompanied him due to popular demand from Japanese fans.