It's a secret to everybody... or a marketing snafu. 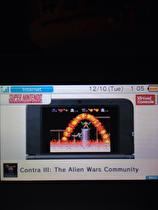 The recent Miiverse update has revealed an image which may signify upcoming SNES releases on the 3DS Virtual Console service. When the Miiverse community page for the Wii U Virtual Console release of Contra III: The Alien Wars is loaded on the 3DS Miiverse application, the game is shown running on a 3DS XL in the header.

No Super Nintendo games, including Contra III, are currently available on 3DS. In addition, no other Super Nintendo Wii U Virtual Console communities showed a 3DS in the header image, rather displaying the Wii U GamePad as one would expect.

Whether or not this is a sign of things to come on 3DS Virtual Console or merely a marketing mistake remains to be seen.

Please be an odd way of confirming crossbuy.


(i am ready for heart-wrenching disappointment.)

I'm hoping the recent lack of VC releases is Nintendo getting their ducks in a row for cross-buy games, and more/same systems on the Wii U and 3DS. A Link to the Past missing on the 3DS when ALBW launched is just a huge missed opportunity. I'm not sure what Nintendo is doing lately. They are sitting on a literal gold mine with the VC if they would take it more seriously.

My expectations have changed drastically since I first filled my fridge with Virtual Console goodies all those years ago. Cross buy is a prerequisite for me at this point. if I were to ever amass any sort of Virtual Console collection on the 3DS, I would need to be confident that it would also be playable on Wii U Virtual Console.

So far on the 3DS I have been happy to purchase handheld Virtual Console games (at least, those meagre few that we have been released) as those are games that I would not wish to play on a TV screen. Purchasing Super Nintendo games on 3DS and then having to buy them again on Wii U virtual console, however, seems crazy to me.

how are we not being offered NeoGeo games already?

2 years to build the 3DS VC library back up to a fraction of the systems we had on the Wii...?
and I don't even want to guess at the percentage of games available...
this is ridiculous, we will have moved on to the next Nintendo's up console by then won't we?
hopefully it will carry over next time instead of restart.

but yes, hopefully this it's the start of cross platform VC. joined accounts should allow that.

Licensing, probably. There was already a brouhaha with the NeoGeo X. And yet, TG16 games still haven't shown up, despite being announced years ago.

I'm guessing that would be because they licensed all these games to VC as a feature of the Wii instead of a service of its own, which is why they will have to relicense everything for 3DS and Wii U.

And if that is the case, then I hope they are now licensing it as a separate service attached to a Nintendo account and not tied to any particular piece of hardware, which is what we've been criticizing them about since the start.

As someone that collects and owns a lot of Nintendo games on older platforms, I find it impractical for me to buy many Virtual Console games on a home console. Buying them on 3DS is a bit different since I can then take the games on the go. The truth is, I'd love to re-purchase many older games for my console, but it's just not worth the cost.

If Nintendo introduces a cross buy option I would probably buy MANY Virtual Console titles, even if the console version cost me an extra dollar. It would be a good value for me at that point.

Maybe I'm being overly optimistic, but I think both cross-buy and SNES VC games on the 3DS (as well as GBA games) will be a reality in the future. The only question is when and why is it taking so damn long for Nintendo to implement this.

(I doubt it will EVER happen), I'd love to see them put "The Death and Return of Superman" up for a VC game for the 3DS. I realy liked that game when it came out, (but as I said, I doubt that will EVER happen).

This might be part of Nintendo's ambitions to merge their handheld and home consoles together into system. Eventually we will get to a point where we will be able able to play any and all Nintendo games on either a home console or handheld. Although once (if ever) the Gamecube makes its way to the VC then we might get cloud streaming to the 3DS since a emulator might be too difficult to pull off for Nintendo.

Now you're playing with super power!

Again if it isn't crossbuy I'm not interested...
If it is though then we are looking at something interesting

Dang it. Open your gates again and get the throne ready. Also, what are you doing with all the gyroids on your grass?

Whoops. Posted in the wrong area. Please ignore my posts like you all currently do anyways and carry on with your regular business in this thread.