Box arts of three GBA games were uploaded to Nintendo's media servers, but they could just be in relation to the original releases. 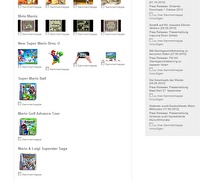 Game Boy Advance games might be headed to the European eShop soon based on images uploaded to Nintendo's media server, as first reported by the German site 3DS-Online and confirmed by Nintendo World Report. However, the box arts were added to the Game Boy Advance pages for each game, meaning that this could just be baseless speculation.

On the server, box arts can be found for three games:

With the recent announcement of a Nintendo Direct coming this Thursday, it is speculated that an official announcement will be made regarding the release of these games. However, the listing of the games may not refer to the 3DS and could just be something in relation to the GBA games themselves.

Check back with Nintendo World Report for any additional details.

Huge! And I'm so happy about Superstar Saga because I never got to play that and always wanted to.

I'm pretty sure this is baseless speculation. If it was related to eShop, Nintendo would have uploaded screens like they have for all their other Virtual Console games, not box art.

Man I hope so. I never got to play Superstar Saga. I hope they release them on the 3DS. I'm on a Metroid run right now. I have completed Other M, Metroid(NES), and now playing through Metroid II : Return of Samus.

OH GOD I WANT THIS TO HAPPEN SO BAD

Great for building hope, but I'll believe it when I see it.