Or should we say OlliOlli Oxenfree? 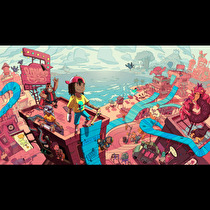 A full slate of upcoming Switch titles were revealed in today's first Indie World showcase. Aside from the games that are out today, companies big and small showed games headed to Switch over the next year.

Very excited for TMNT Shredder's revenge. I hope that Limited Run releases this one on a cart.

Well played on the subheader.