We probably won’t be seeing a new Ice Climber game anytime soon either. 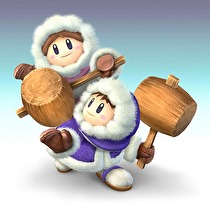 Masahiro Sakurai, the director of the new Smash Bros. games, stated the Ice Climbers were running on the Wii U version of the game, but were cut due to the technical limitations of the 3DS version. A higher priority wasn’t given to the duo because the odds of a new Ice Climber game coming out in the near future is rather low.

Sakurai also went on to mention that the trophy descriptions found in the new games were written by Akihiro Toda. Toda is known for working on the Mother (Earthbound) series.

Additionally, Sakurai reiterated that the reason why the 3DS and Wii U versions were released at separate times was in order to give each game adequate time for debugging. If it had not been for this separate debugging process, both games would have likely been delayed until 2015.

All of this information comes from a bi-weekly column Sakurai writes in Famitsu.

I never was a fan of Wobbling or the various advanced techniques to get the ice climbers desynched, but hearing that they were running on the Wii U version is a bit... distressing. Ultimately, while I personally would take the idea of very personalized customization of characters and Smash Run over Ice Climbers, I recognize that quite a few people are not kosher with this and would have much rather played the game stark in exchange for having the fighter.


For those people, I mourn. I personally am loving the way this is rolling out besides maybe the lack of global simultaneous launch for each game.

Why not just make them WiiU Specific?  I mean if the 3DS can't handle them then why not?

Why not just make them WiiU Specific?  I mean if the 3DS can't handle them then why not?

Sakurai has previously said both versions would have the same roster though he didn't elaborate on why. It would make sense if there cross play, but there isn't. I'm still hoping he goes back on roster parity. I'm not a huge Ice Climber fan, but I'd just hate to see them get cut from the game especially when Sakurai admitted they were working in the Wii U version. The Ice Climbers were really unique and the only representative of the franchise. Bring them back!

So in other words, the 3DS version existing made the Wii U version worse. The concessions we have to make to convince the Japanese audience to buy games...*sigh*

I was never a huge fan of the Ice Climbers, but they had an interesting dynamic you didn't see in any other character. It's a bit of a shame to lose them.

So in other words, the 3DS version existing made the Wii U version worse. The concessions we have to make to convince the Japanese audience to buy games...*sigh*

In a manner of speaking, I guess. Sakurai is just arbitrarily withholding Ice Climbers from the Wii U version. The 3DS version existing isn't stopping the characters from appearing in the Wii U version as the games function independently of each other. It's really just a bizarre choice. The 3DS version is already worse, but it's also $20 cheaper. There's no need to try to justify this as "Well, we want both games to be even" because they aren't in many ways.

Is it really a big deal for there to be a character can't that can't be played in WiiU vs 3DS Matches?

Having the same roster between the two versions could potentially make any balacing type stuff that much easier so... there's that.

So does this mean we can expect a new Duck Hunt game soon...?

So does this mean we can expect a new Duck Hunt game soon...?

I have wondered what a "Super Duck Hunt" with the Super Scope would have looked like. I don't think there'd be any duck left after getting hit with that.


I think we got Ice Climbers in the first place because Sakurai/Nintendo must have some sort of goal with each game to find some crazy off-the-wall character and make a fighter out of it.

Sakurai said the rosters would be the same on both versions, so I think it's fair to say that the 3DS version's existence is what got them cut.  Sure, it was Sakurai's choice, but he probably just wanted to make the 3DS version look too inferior.