Monopolize your Zelda and/or Pokémon fandom. 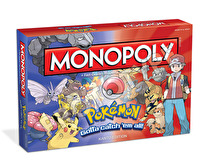 Both Monopoly Pokémon Edition and Monopoly Legend of Zelda Edition are set to release August 21, 2014, as reported by the website.

A 550-piece The Legend of Zelda puzzle was also listed, which Hobby Supply lists as releasing a week earlier on August 15. It features various characters from the series and measures 18" x 24".

For Pokémon, this isn't the franchise's first time teaming up with Rich Uncle Pennybags. In 1999, Monopoly: Pokémon Edition first came to the scene as an adaptation of the Red and Blue versions as well as the anime.

"Kanto Edition" There will be more? :D

Zelda Monopoly is going to get bought so hard by me.

Wish they would do this with more games than just Monopoly. I have 3 Monopoly sets already, I don't really want more of them.

I'd love the die-cast playing pieces.. but.. not for the price these will retail for. Monopoly being pretty terrible doesn't help.

I'd be more interested in Zelda Monopoly if it wasn't based so much on Skyward Sword.  If I was going to pick one Zelda to commemorate with a board game it wouldn't be that one.

The puzzle uses Ocarina of Time, which I like a lot better, but I would be more interested in a Zelda Monopoly that covers the whole series.

But if it covered the whole series they'd have to account for the three different outcomes of Ocarina of Time and their various effects on the timeline.

"Get confused by the f**king owl: Go back 3 spaces"