And it's still coming to North America on November 22, despite the European delay. 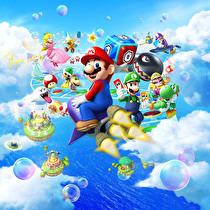 The 3DS debut of Mario Party, coming to North America on November 22, will not feature any online multiplayer, according to a Nintendo representative at a recent demo event. Mario Party: Island Tour will, however, be fully playable using one card in Download Play.

The third portable entry in the nearly 15-year-old franchise features 80 mini-games that can be played individually or in one of the 7 game boards. It will also use AR Cards for mini-games and feature StreetPass, though the extent of the StreetPass is unknown as of now.

Mario Party: Island Tour is slated for a November 22 release in North America, a winter 2013 release in Japan, and a 2014 release in Europe.

I'm glad to hear that it isn't delayed here, I had just assumed it would be. However it makes me wonder why it was delayed in Europe.

Honestly while I'm sure everyone would get a kick out of Shaymin, Broodwars, Anyone else we can get looped in, and I playing online as an NFR Episode beyond that I don't see a market for it.

Online Mario Party doesn't really work. You all have to be within punching distance of each other to really have a blast with it.

One of the very few Nintendo-related announcements to ever make me genuinely angry. I had to rewrite this a number of times to contain less colourful language (a thousand pardons, I'm Irish and it literally works like a reflex).


Nintendo seriously needs to get with the times and realize that not all of us have a group of friends we can just call up to sit with and play local multiplayer games with at a moment's notice. Most of my gaming friends are now overseas. Releasing multiplayer focused games in 2014 without an online option is downright unforgivable at this point. Especially in the West.

No online, im not buying. its 2013 Nintendo needs to keep up or it is going to shut down