Its been a long time coming, but Pokémon fans will finally be able to see a proper adaptation of the original games. 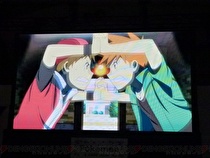 A new Pokémon anime title called Pocket Monsters: The Origin has been announced at the Pokémon Game Show event currently happening in Japan.

This new anime will be based on the original Pokémon games Red and Green and will feature the story of Red along with his rival Green. The first gym leader, known as Brock in the English version of the games has also been shown so far.

This new anime will have a special broadcast on October 2 in Japan. It is currently unknown if this is a one off special or a new series. Check out the trailer below.

Update: It has been confirmed that Pokémon Origins will be a special feature, not a full series.

I'm probably alone on this, but I'm much more excited for another upcoming anime with the subtitle, "The Origin."

Considering the trailer shows Red at the beginning with a Charmander, and then already at the Pokemon League with a Charizard, it's probably a one off special.

Best we can hope for is the rating are really good, so they eventually decide to make this a real 13-26 episode anime series.

"Proper adaption" is a very narky thing to say.
There has already been, by definition, a proper adaption of the original Pokemon games. Liberties were taken to expand the world sure, but that was mainly to fill in the story gaps and embellish the between-gym route journeys that, let's face it, were less than spectacular in the original Game Boy iterations. Compared to Fire Red and Leaf Green, the originals were quite terrible and succeeded mainly on hype and media tie-ins.
Some people are sick of Ash being the main hero of the story in current seasons. That doesn't make the original anime any less relevant to the franchise. It's like saying the original Dracula novel by Bram Stoker is not a real interpretation of vampires because everyone's sick of them being in movies like Twilight today.

But I digress. This has been confirmed as a one-off special, not a new series. It looks really nice and I'll watch it and probably love it, especially since it looks very close to Ken Sugimori's art from the manuals.

At least it's not Gold/Silver/Crystal.

Wait, that's Blue, not Green! Green is the female character!

Wait, that's Blue, not Green! Green is the female character!

In Japan Blue is Green and Green is Blue.

I'm excited for this as well. I'm sure they'll fill in the middle bits. The trailer shows Red battling Brock, so I'm sure he'll go for the rest of the badges (maybe even battle Team Rocket?) and fill our the story. It looks like it could be better than the Pokemon Adventures episodes they've done in the past. And, forgive my pun, those were gold.

just to clarify because updates don't show up in the actual thread this is a one off thing.

So, just one full length feature? That's a bummer. I was hoping for at least a mini-series.