Injustice: Gods Among Us Update and DLC Characters Now Available for Wii U

The injustice over the downloadable content for Wii U is at an end. 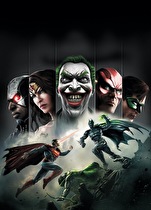 An update for the Wii U version of Injustice: Gods Among Us is now available on the American Nintendo eShop, adding support for four DLC characters, dozens of character skins and a new mode.

The update to the game is listed as version 1.1.0 and brings in some balance tweaks and compatibility with the DLC. The four new characters, available for $4.99 each, are DC Comics characters Lobo, Batgirl and General Zod, plus Mortal Kombat's Scorpion.

A handful of the character skins are available for free. There are also a couple of packs that are not currently available to purchase on the other consoles in the US. The two packs are the Ame-Comi and Lockdown.

The Lockdown pack was previously only available on other systems if the user bought and beat the iOS Injustice game and then linked a WBID account with their console version, but Wii U owners can simply purchase the pack by itself now.

The full list of what is available is as follows:

Modes - $2.99
Zombie Mode (Turn every character in the game into the undead)

Nice hat it's easier to get the Lockdown pack on the Wii U version.

Will debate on if I care or not about this. Would have liked to have this content like two months ago.

To be fair, Zod was just released yesterday. And the Ame-Comi skin pack was previously Japan-exclusive.

Anyway when I finally get a Wii U and If I have extra cash on hand, I'll download all this crap .....