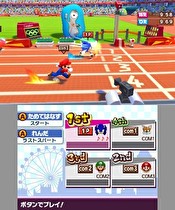 The Wii version of Mario & Sonic at the London 2012 Olympic Games was already released in all territories.