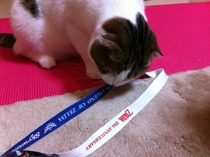 Masahiro Sakurai, Super Smash Bros. Brawl and Kid Icarus: Uprising director, posted a photo of his E3 pass that hints at the possibility of a Zelda 25th anniversary project at E3.

Another photo features a playful shot of Sakurai's cat gnawing at the pass's lanyard. On one side, it has the words "The Legend of Zelda: Skyward Sword". On the other side, it reads "Zelda 25th Anniversary".

Earlier this year, Nintendo executives Shigeru Miyamoto, Satoru Iwata, and Hideki Konno mentioned the company is working on projects commemorating the 25th anniversary of the release of The Legend of Zelda for the NES, similarly to last year's Super Mario anniversary celebration.

In a live video interview with Eiji Aonuma, conducted by Famitsu earlier this week, the series producer hinted at another Zelda title being shown at E3 aside from the upcoming Skyward Sword. No other details regarding the project have been revealed.

Lets hope for something big, UNLIKE the uber lame mario allstars wii

It'll be a Wii port of the GCN Zelda collection :p

It'll be a Wii port of the GCN Zelda collection :p

Forget port.  If Mario has taught us anything it will be the GCN Zelda Collection on a bigger disk with a Zelda Cube controller.

On the other hand, there have been several fairly major Zelda bonuses (e.g. GC OoT/MQ, GC Collection, Tingle's Balloon Fight), but Mario bonuses have been sparse.

There are a couple of Japan-only Zelda things they could throw in as bonuses, but that's probably expecting too much. Whatever it is, I'm hoping it's on the Wii.

They are gonna finally port over Tingles Rosy Rupeeland as past of the surprise.

Prepare to be overwhelmed with joy!!!

They are gonna finally port over Tingles Rosy Rupeeland as past of the surprise.

Prepare to be overwhelmed with joy!!!

Maybe it will be a compilation of all the old Zelda games from before the GameCube on 3DS, but completely remade with updated graphics for the 3DS! But let's not get our hopes up like Super Mario All Stars for Wii.

Anyone hoping for anything that would include OoT - I'm sorry to say that it's unlikely to happen.  With the release of OoT3D for the 3DS, I can't see Nintendo doing anything to cannibalize its sales.

sort of like MGS Collection HD will do to MGS3:SE3D?

I hope Nintendo wouldn't Capcom itself like Konami is Capcoming Nintendo right now.

I kinda want to see Wind Waker on the Wii (or 3DS) but being that it's a 25th Anniversary, probably not...

I kinda want to see Wind Waker on the Wii (or 3DS) but being that it's a 25th Anniversary, probably not...

WindWaker on 3DS :D
It be going full Circle at that point since a lot of the mobile ones seem to spawn from Wind Waker. (Tingle Games, Phantom Hourglass, Spirit Track, Four Swords sort of, I think Tetra got a game.)

Watch it be a collection of the CD-i Zelda games.

Watch it be a collection of the CD-i Zelda games.