And there will be a secret NIS-related addition, too. 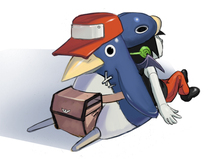 Additionally, the game will feature a NIS-related Easter egg, likely something involving their mascot, Prinny.

Cave Story 3D is coming to 3DS on August 9. Read our impressions of the title and our interview with Daisuke "Pixel" Amaya and Nicalis' Tyrone Rodriguez.

I demand to see this as written by a Prinny.

As of right now, just the characters.