Nintendo characters are printed on each of the remaining cards. 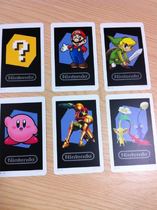 Rather than the yellow background of the question mark block, the background squares are blue. Mario, Link, Kirby, Samus, and Pikmin appear on the cards. In a post on NeoGAF, Alex Donaldson reported that the cards will show the characters perched on the card as virtual statues when activated in one of the six included AR modes, called "Star Viewer." Buttons on the 3DS change the statues' poses, and photos including the characters can be taken. Similar functionality exists using the question block card as a base to show Miis and Nintendogs in virtual 3D.

The series of unboxing photos for the handheld, including this AR card picture were posted on Twitter by UK retailer GAME. The photos have since been taken down.

It's a little disappointing that the rest of the cards are all used for one mode.
If they make a 3DS version of Super Smash Bros., I hope they use this concept to render the entire trophy collection in virtual 3D space.

Please don't turn this into e-Reader 2.0.

I would absolutely love if Nintendo sold these cards in like booster packs, or at least shipped 1 card related to every 1st party game in the case.

It seems the shooting the dragon AR game is the best, and everything else is just for show. I think that will get old very quickly.

If the area around the character transforms to a familiar environment for each character, that would be cool. A mini-game for every character doing something as simple as jumping, defending, or shooting at flying objects, would have been the best route imo... We'll probably have to buy cards with upgraded features. These do come with system, so it is somewhat forgiveable, maybe.

i was hoping for duck hunt. scan the card outside and the 8bit ducks fly around in your back yard.

That is strange that they are packing six cards in and only five of them serve to bring up a statue.

Is it possible that the back side of each card has a different augmented reality game, and then the other side is the character card we are seeing?  I actually think that would make a pretty awesome way of doing it.

And yes, a card each game would be a great incentive and if Nintendo started it then I could see 3rd parties following suit.

The 3DS come preloaded with the AR games, so all it does is recognize a picture (or markers on the card) and load up the software specific to that card, right?

Hold on folks, they said that the card statues mode is only 1 of 6 different AR games. I highly doubt they would pack 1 AR game (dragon) and then the rest be just statues.

Hmmm... I somehow read that as 1 in 6 cards, not individual modes. So I'm going to go ahead and assume that the 6 modes is the pre-installed software, and every card will have those six modes. If so, that'd be cool.

they should release a different card with each new sale of a 3ds pokemon game when it comes out. then eachone has a different rare pokemon and a few have legendaries. then you scan them in game and you have a chance to catch them. yeah.