The fourth version of the strap includes a locking clip that holds the loop around your wrist.

Nintendo World Report forums reader UncleBob has given us word that Nintendo is circulating a new type of Wii wrist strap, as seen in this photo: 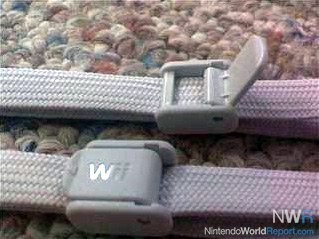 As you can see, this new strap includes a little locking clip, replacing the sliding clip of the previous models, which had a tendency to slide away from the player's wrist and loosen the strap. This new model would be the fourth incarnation of the strap; the first was the original model which tended to break, the second would be the replacement straps with the thicker connector to the remote, and the third was the replacement of the replacement that lacked the Nintendo and Wii branding.

Nintendo World Report has contacted Nintendo to see if these straps are freely obtainable, but we have not yet heard back. We'll update this story once we have any official comment.

I haven't seen the "third generation" wrist strap... anyone got one of those?

At least they left the NWR logo in tact.

I too my straps off. They just get in the way. Plus who wants to have these remotes sit on your coffee table with straps attached to them. Looks much better without. I think those nerf wiimote shells look sweet. They are coming on Oct.

Now you're even more sort-of famous!

UncleBob could be NWR's new media producer, he will take the photos and record video footage of any event that NWR is invited to.

One thing is for sure: He needs to begin water-marking his pics, preferably with his wife's Elmo toes, so that everyone knows these things come from him.

Pretty popular picture for something taken in five seconds with my camera phone.

It is highly annoying when sites steal the picture and don't even link back here to NintendoWorldReport.com. Or when the link to another site as their "source"... Well, at least the watermark is still on it.

Your lucky they didn't dig into the thread and steal the photo without the watermark...

can I order these straps??

Quote
Originally posted by: Shecky
Your lucky they didn't dig into the thread and steal the photo without the watermark...

Yeah, when I noticed everyone had taken the watermarked image, I quickly changed my original thread...

It seems NWR got the Psuedo Exclusive on this. CVG is reporting it now but doesn't tell its source. TG Daily is reporting CVG as its source. A good amount of places are quoting the original source, here. You guys should really try hard to follow this up with Nintendo PR. Maybe see if you could be the first to announce how to get these...

Does CVG ever report their source? That Mike Jackson guy irritates me in how he always takes stuff without mentioning the original story.

You can order these directly from Nintendo. I received mine in the mail today. Free of charge. They are quite nice.