Ori and the Blind Forest and Ori and the Will of the Wisps are two titles that, naturally for a game and its sequel, have a lot in common. From the outside looking in, what it looks like to play these games is very similar. However, how each one feels to play and their overall design is totally different. The driving force of this phenomenon is the way a resource called energy functions in each. In The Will of the Wisps the resource is allowed to affect everything about the game. In The Blind Forest, it’s still valuable, but isn’t used in a particularly interesting manner and is fairly one-note. The original’s use of energy is let down by the mechanics it’s tied to and the failings of the ones surrounding it.

Technically, energy in The Blind Forest has a number of functions, but the vast majority of the time, energy will be used to create a soul link. These are basically checkpoints. Saving is integral to any game, and it’s no different here. Unfortunately, preserving progress being tied to a resource hamstrings that resource’s ability to effectively do anything else. While energy can also be used in combat and as a key to open new paths around the map, those uses are downplayed either immediately or later on in an effort to support the resource’s use as a save system. 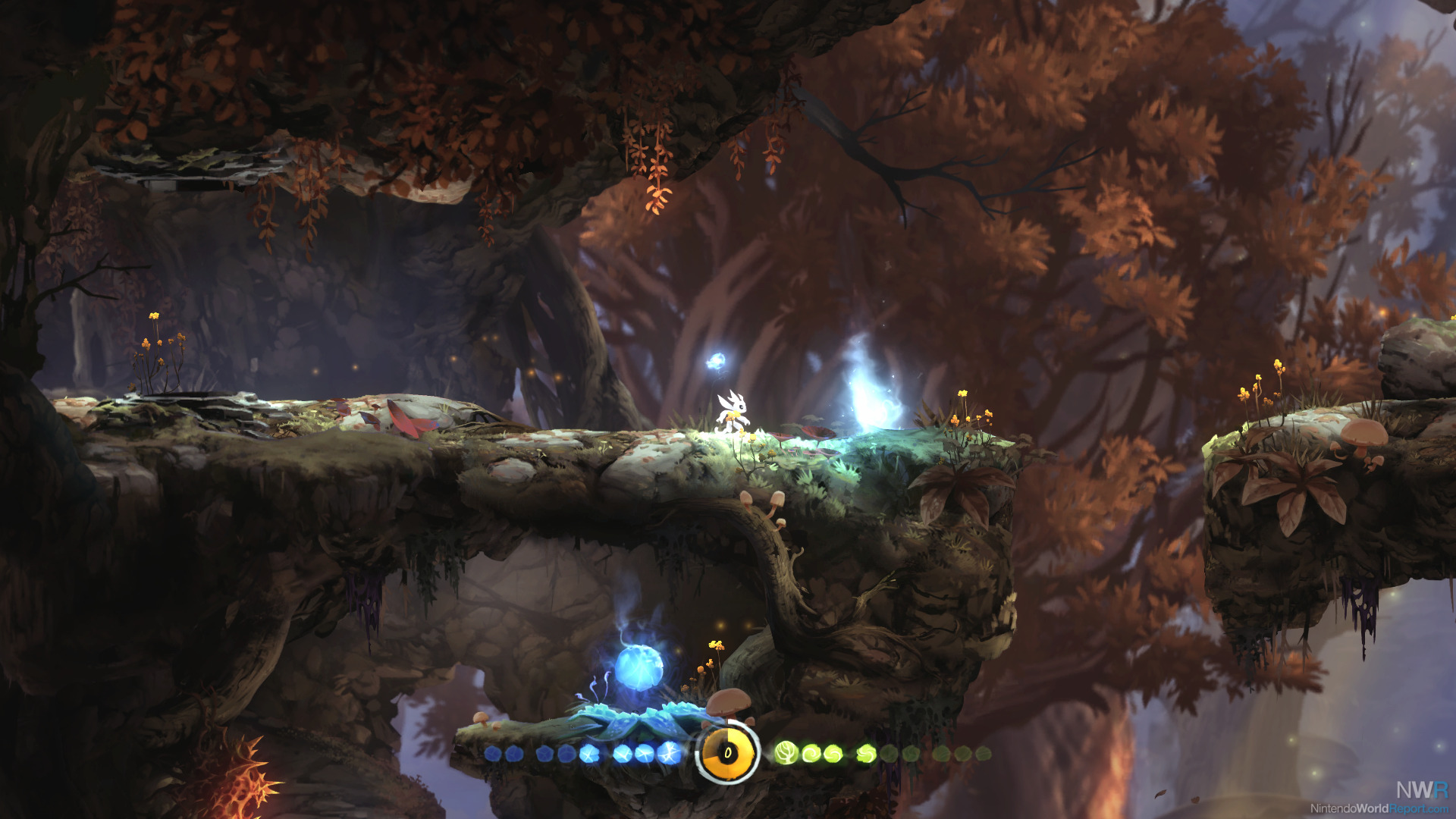 The blue fire is a soul link and also the root of the game's problems.

One of Ori’s abilities that is powered by energy can be used both in combat and as a key, the Charge Flame. This is a move that creates a small explosion around Ori that damages many enemies at once or destroys certain terrain. Both of these uses are made less impactful by design. The combat uses of Charge Flame are almost never needed as combat is incredibly basic. Most encounters can be solved by walking away from the enemy and mashing the button for Spirit Fire. Later in the game, a new ability Stomp is learned that can destroy terrain at no energy cost.

There are actually two different locks that can be opened by spending energy. The specific terrain mentioned above and gates that open by spending four energy. The energy gates are more interesting due to holding back players without enough time spent in game to have extra energy or proper knowledge of where energy stones—a breakable object that restores energy—are nearby. Energy gates won’t be replaced by a new ability, but they do share a different failing of the Charge Flame locked terrain. In order to avoid using energy on anything superfluous, these locks are not required to be opened to finish the game. They’re all optional, except for maybe one instance. Locked paths with necessary routes behind them are exclusively opened with the no-cost Stomp. This robs The Blind Forest of an interesting scenario of needing to reach an area with at least one energy as well as some mystery of what certain paths hold. 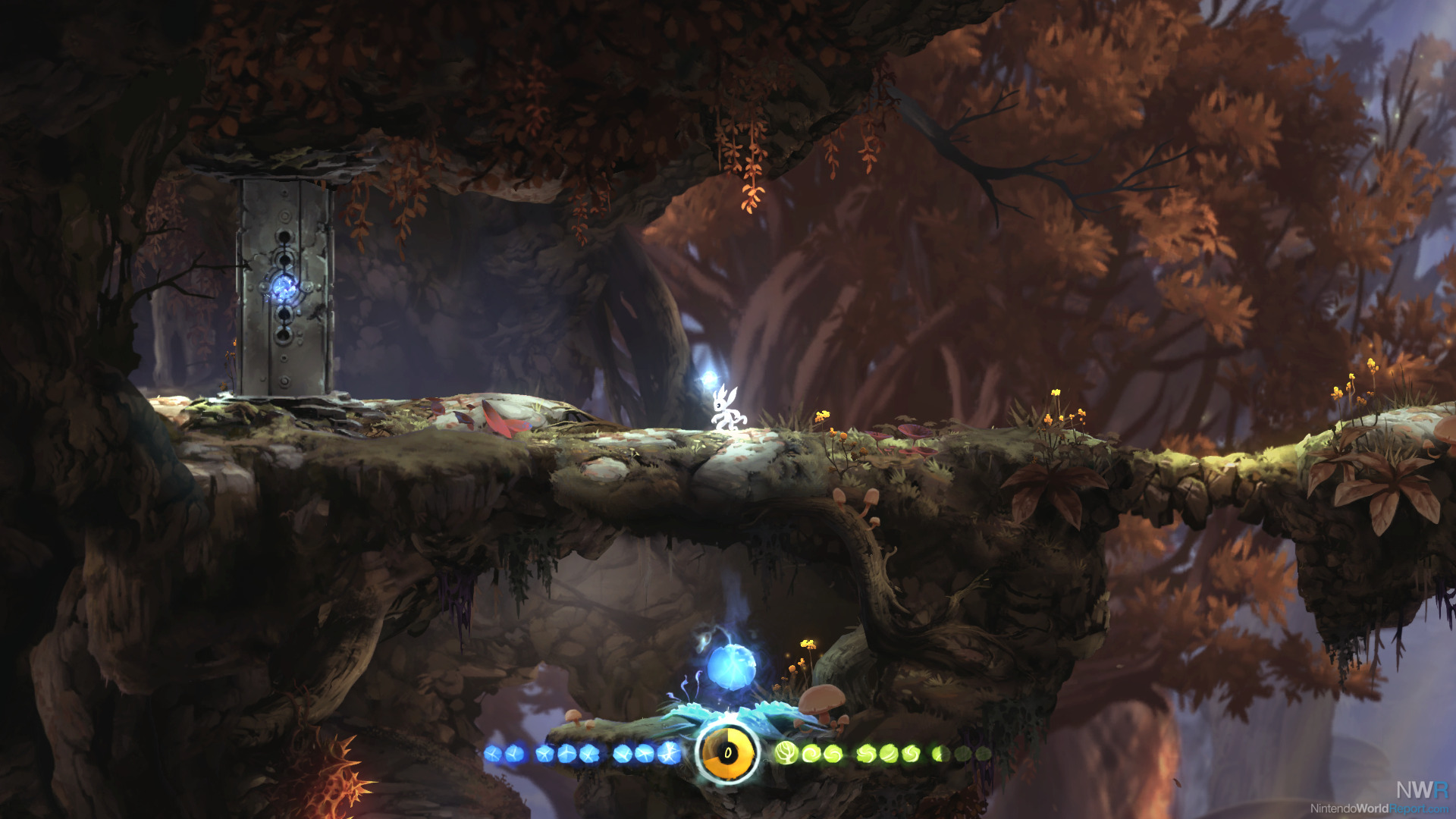 The door to the left is an energy gate and the rocky section of ground to the right can be opened with Stomp.

How Will of the Wisps improves on the original is by freeing the resource from the checkpoint system. For the sequel, Moon Studios decided to use a traditional system where the game automatically saves at certain points on the map. This no longer requires the player to have an energy reserve on them at all times, so spending it to solve a current problem isn’t seen as a waste. This allows the number of uses that energy has to expand dramatically. Energy can be spent as a heal, a strong hammer swing, a bow and arrow, a light source, or various other moves. 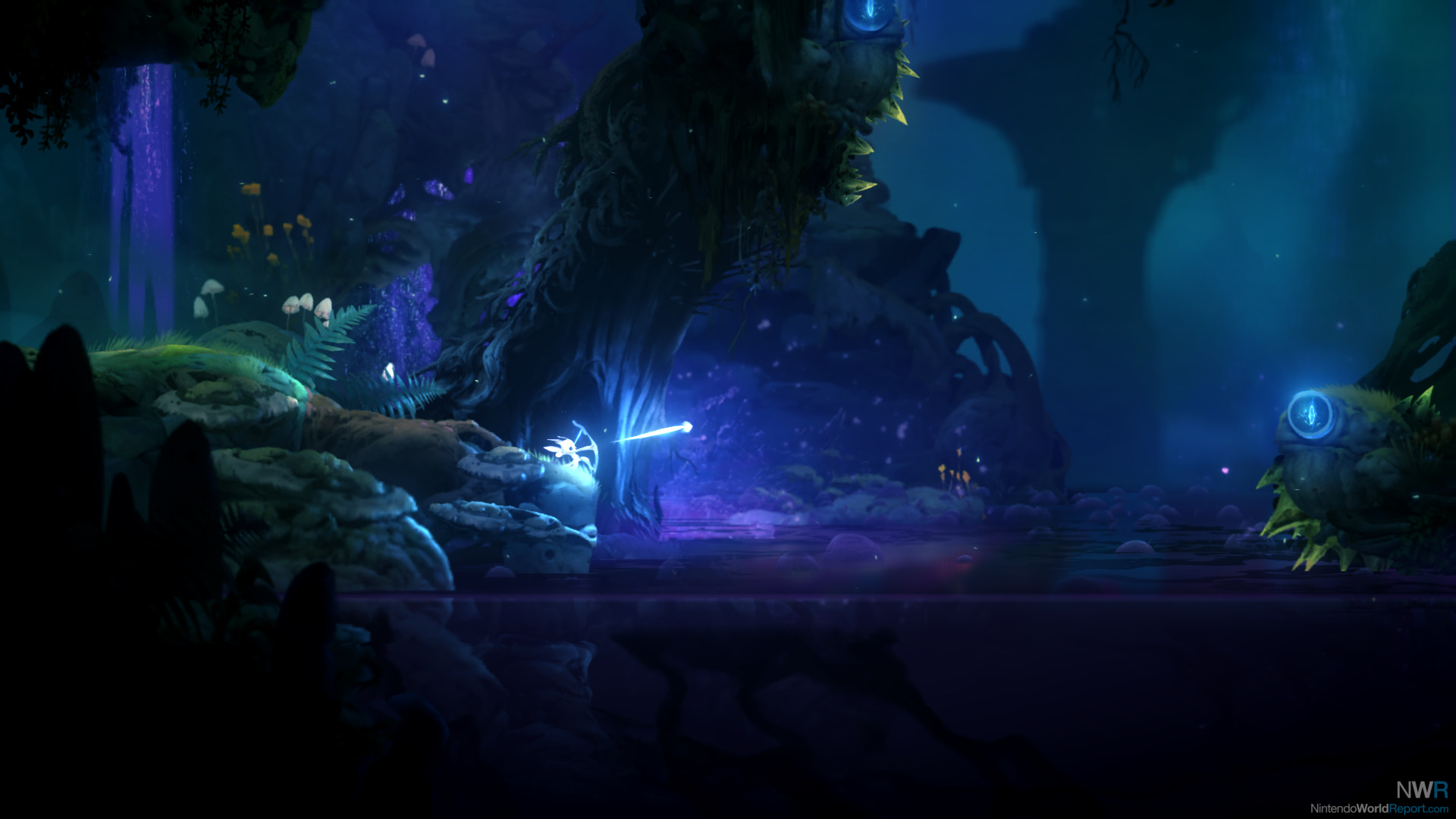 This doesn’t remove energy’s other uses from The Blind Forest in its sequel. It can still act as a key. Just how to use that key is different. Shooting special switches with the bow can activate moving platforms. Unstable ground can be smashed open with the hammer. All of these locks can now be placed before story-required content. The balancing act of needing energy for puzzles while also requiring it to save isn’t an issue in Will of the Wisps. Tricky platforming challenges can be interwoven with shooting accuracy challenges.

The larger variety of possibilities also changes what energy stones mean to the player. Mouldwood Depths is an area designed around all encompassing darkness. Ori has to move quickly between sources of light since spending too long in darkness kills her. Halfway through the area, she gains the ability to illuminate her surroundings at the cost of energy over time. Traversing the area is now about quickly moving from energy stone to energy stone. Where areas of light were the safe spaces in the first half of Mouldwood Depths, energy stones take their place as safe spaces in the second half. 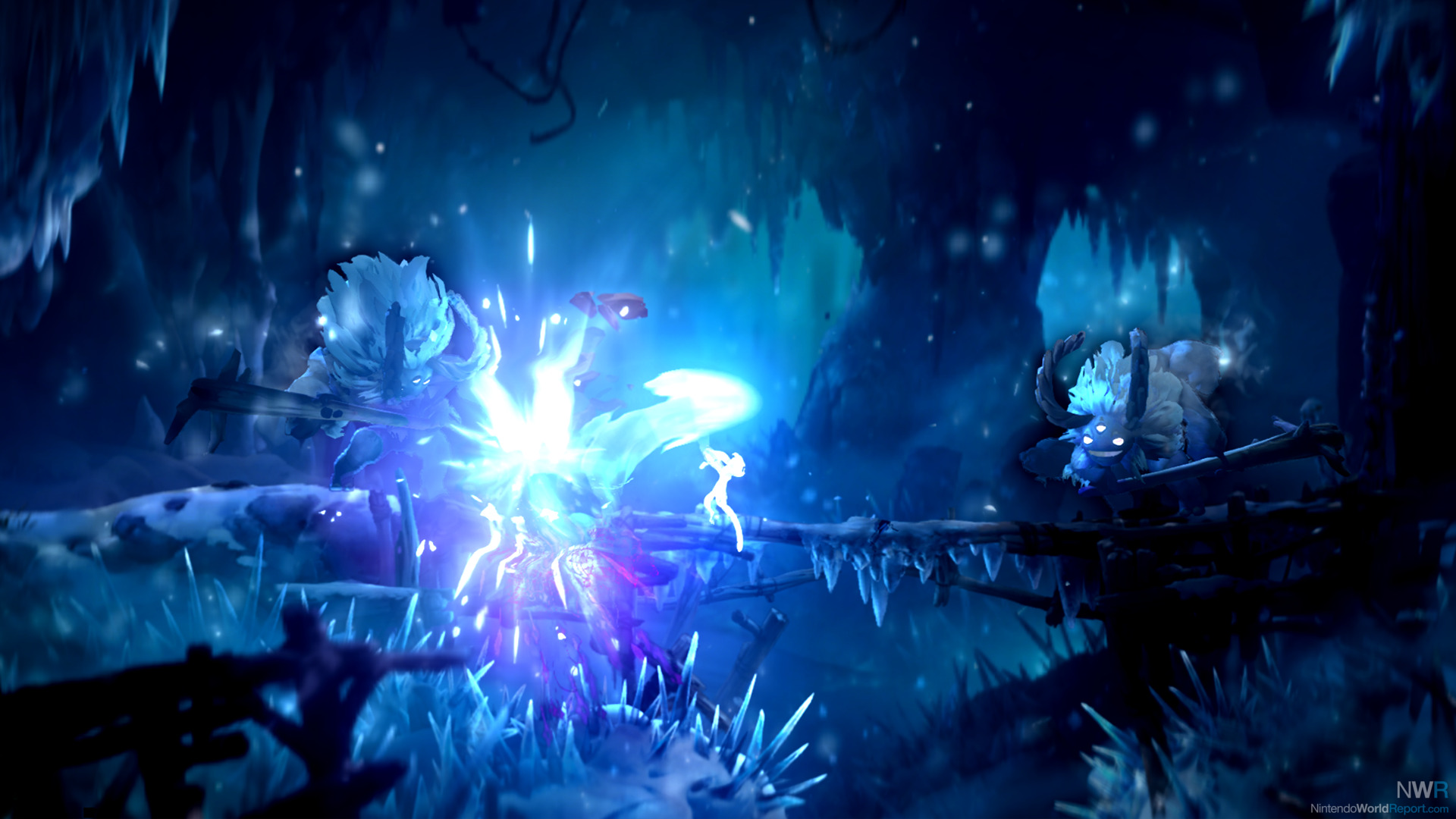 Energy’s new functions also have a notable effect on combat. Ori and the Will of the Wisps has a much better combat system with more interesting methods of fighting the enemies. Melee combat is now the standard with ranged combat or special effects being a bonus that requires energy. If there is an enemy up ahead that you don’t want to fight, then the lance ability can defeat them from afar. Some enemies have wooden shields that need to be burned away with Light Burst. Damage taken in an encounter can be healed back with the Regenerate ability. All of these have to be weighed against what that energy could be spent on in the immediate future.

The ways that changes to combat and world design combine are most elogantly demonstrated in the Kwolok boss fight. This is a boss that hovers over the arena floor and doesn’t touch the ground, so ranged combat is very useful. Moon Studios included an energy stone in the lower right corner of the arena so the player could always use their preferred ranged attack. This makes that section of the arena more valuable than the others as well as giving the player the goal of trying to stay or quickly return to the bottom right corner of the arena. 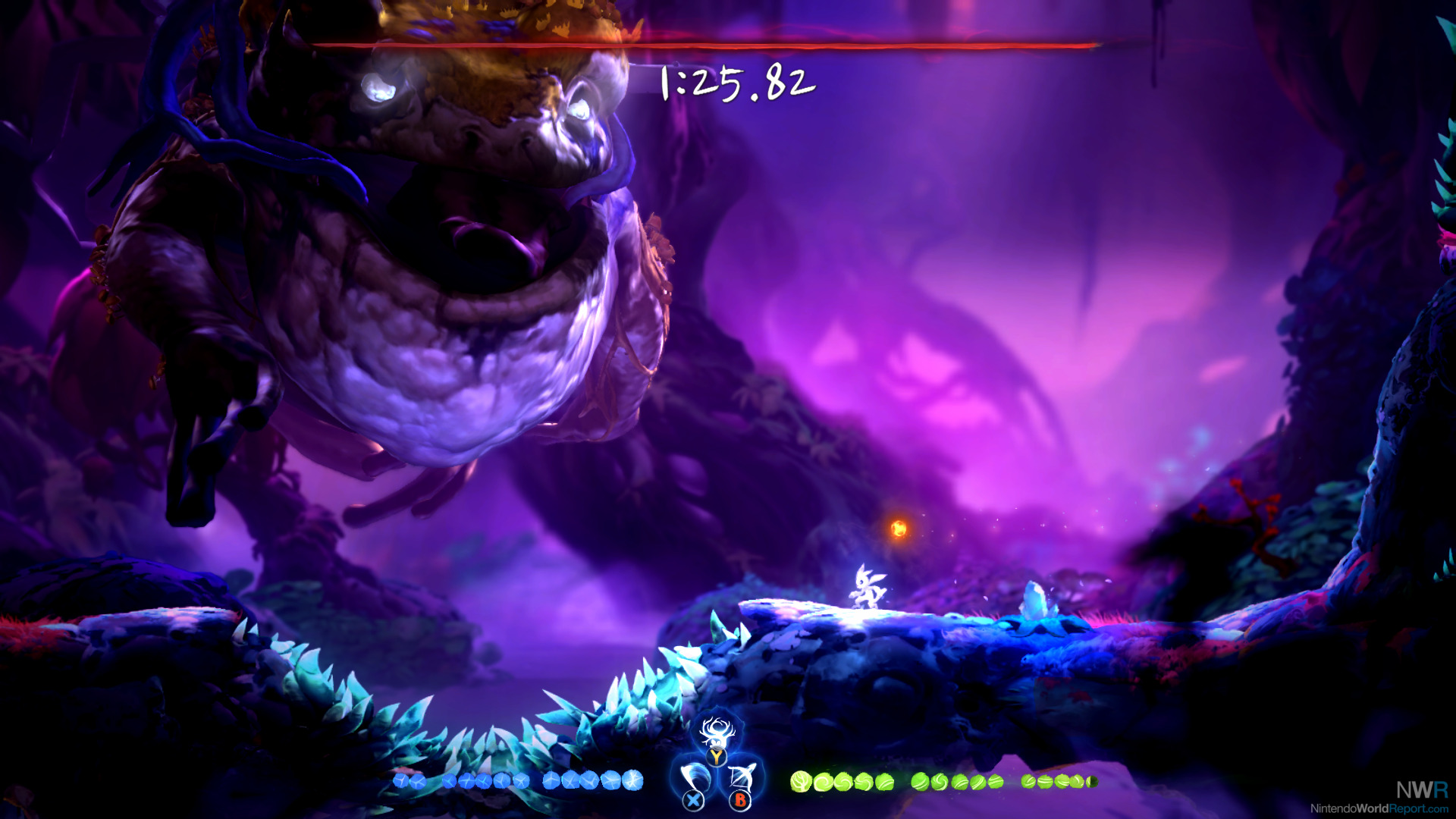 This also has the knock-on effect of letting the player continuously heal throughout the fight. Moon Studios likely didn’t want the ability to tank damage indefinitely in this fight to be a viable strategy since they designed around it. Half way through the fight, Kwolok floods the arena and takes away the player’s ability to stand on flat ground. Regenerate can only be used while Ori is standing on flat ground, so she can’t heal at all, even if she has an endless energy supply. 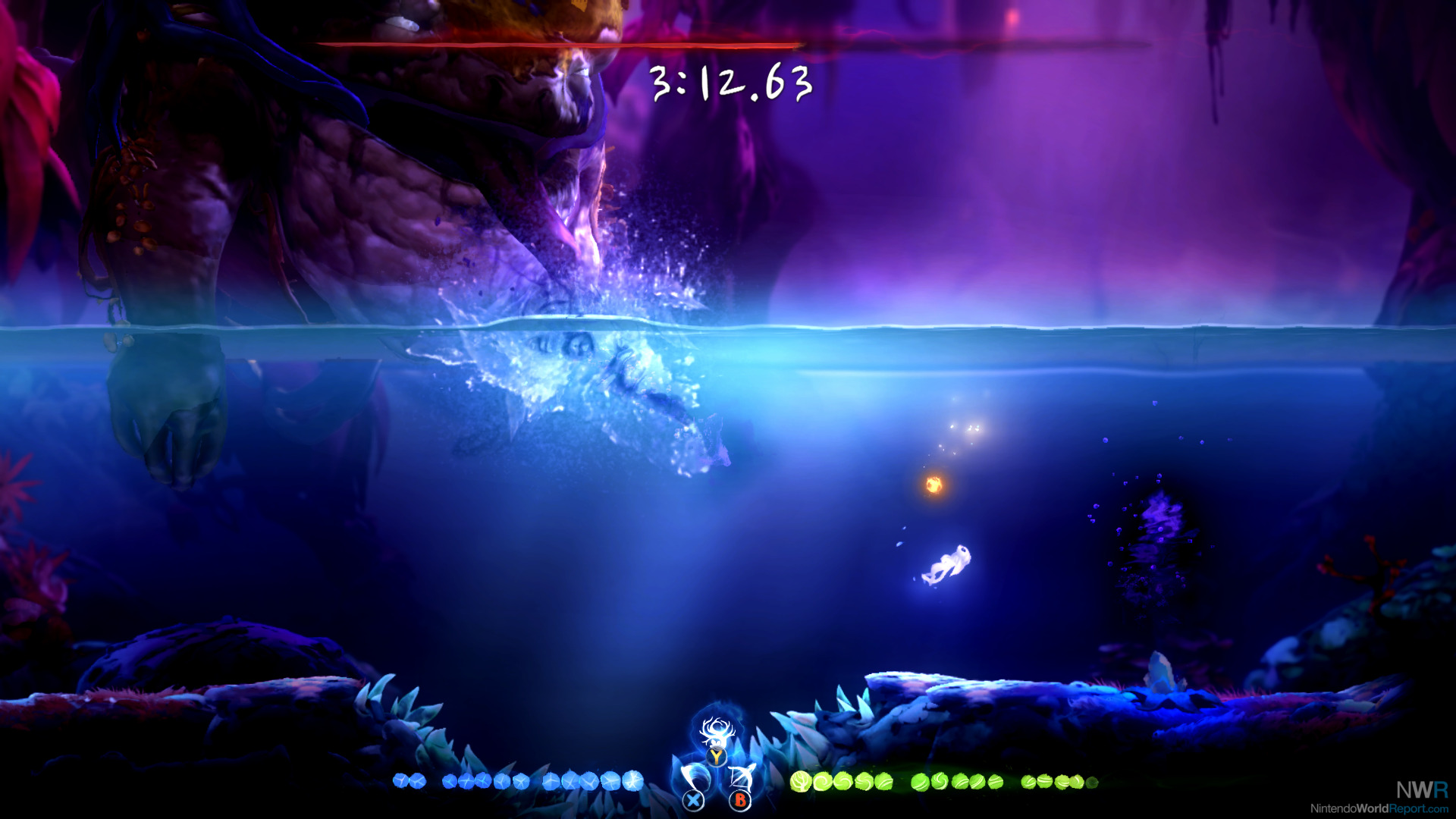 The change in the arena then shifts how Ori and Kwolok both fight. Ori can use her Swim Dash ability to fly into the air and reach Kwolok with melee strikes or cling to the side of the arena and shoot her bow from there. Kwolok has several new attacks, like shooting missiles that move fast in the air and slowly in the water or summoning water enemies. The summoned enemies can be sent flying into Kwolok to damage him using Ori’s Bash ability.

All of these changes and interactions in one fight come from the basis that saving the game shouldn’t be tied to a resource. How to fight enemies, how combat evolves over time, the way areas are designed, and a number of the other positive changes in The Will of the Wisps stem from that decision. Experimenting with different systems of saving is a worthwhile endeavor. Shovel Knight’s opting-out of checkpoints for rewards by destroying them is a similar idea but more successful, for example. Moving away from the experiment Moon Studios tried in The Blind Forest allowed Ori’s sophomore game to be much greater than its predecessor.