A NWR Christmas Story: The Legend of Zelda: A Holiday for the Ages

With Christmas just a few days away, Pedro reminisces about the great holidays he spent with Link and friends.

It is the holidays once more, and I am always filled with joy and glee whenever this great season arrives. Even if things have been hard for the whole family, I always look forward to spending time with family, partaking in the festivities and enjoying the madness of the consumerism that the holidays have unfortunately bestowed upon us. You may recall that in 2009, I wrote a blog about how I decided to help out at a GameStop store during a holiday shopping rush, and came out feeling satisfied knowing that I may have made a family's Christmas morning. I also mentioned that while I understand it is not wise to talk about one's acts of kindness, I just felt really good doing that for those people.

I decided to continue the mentality expressed on that story, though this time it actually deals with a special Christmas connection I have towards one of Nintendo's great franchises. That series happens to be The Legend of Zelda. The series has been celebrating its 25th anniversary throughout the year, so I thought it would be great to talk about how the series has become a holiday tradition for me and how it has stayed with me throughout the years. Our story begins in 1998...

I was in my second year of high school. I was a HUGE Nintendo fanboy then, constantly belittling the efforts made by Sega and Sony. The Nintendo 64 was one of my beloved systems at the time, always playing its great games like Super Mario 64, Mario Kart 64, and Star Fox 64, among others. During this time I was also an avid reader of Nintendo Power. I just loved their coverage of games, as well as previews of games to come. One of the games I was looking forward to the most was The Legend of Zelda: Ocarina of Time. Now, I had never fully played a Zelda game before. I did play Zelda II on the NES in small bursts, but I never completed it. Ocarina of Time truly looked special. It appeared that it was going to beat the pants off the other games in terms of ambition, magic and fun. That holiday season, the one game I wanted under my tree was Ocarina of Time. The more reviews I read about it, the more I couldn't contain my excitement. I even thought of just buying the game and not waiting for Christmas, but I backed out because this game would be too special for me to play on any other day. This would be a Christmas present.

As the weeks went on, I began to feel worried and despaired. The game was very hot that season, and whenever I checked the stores, they were always sold out. I asked my mom if she had gone shopping, and she cheekily would say, “I haven't had the time to go to the store, and money is limited.” In my naïve little mind, I saw it as a sign that I would never get the game. It was just too popular. I did spend the rest of my days playing games like Banjo-Kazooie on the Nintendo 64, and the Game Boy Color and Camera proved to be hits with my cousins, but no matter what I did I would always dream about Ocarina of Time.

Christmas was upon me. I had spent the day with my mother doing some last minute holiday shopping, enjoying the sights and dreaming about the presents I would receive. Christmas Eve soon became Christmas morning, and with great anticipation I went to check my presents under the tree. I saw a very familiar rectangle box. My heart was racing, as I was both excited and fearing it wouldn't be the present I desired most. I ripped away the wrapping, and started to see hints of gold through the destroyed wrapping. I finally unwrapped the present to see...

THE LEGEND OF ZELDA: OCARINA OF TIME!! 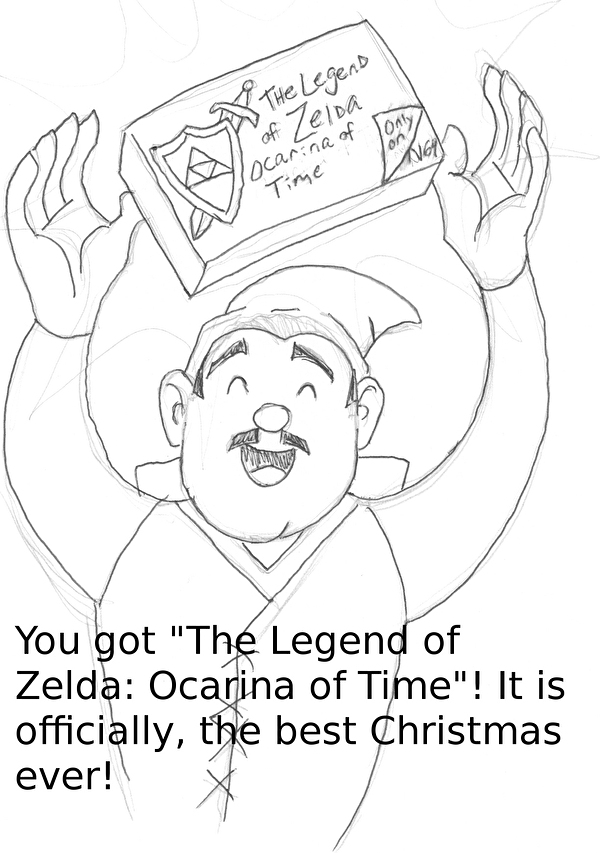 My dreams had come true that morning. I had feared so much that I wouldn't get this present that seeing it there in my hands brought me a lot of joy. The events of that morning became an event I would never forget as a gamer. Christmas 1998 was the best Christmas ever, not just because of Ocarina of Time, but also because of all the family warmth and happiness expressed throughout the day. Once Christmas was done and over with, all my attention through my holiday break was on Ocarina of Time. I was happy, I was challenged, and I even shed a tear or two while playing it. I was so obsessed with the game that one night my dad came into my room and told me to turn the game off and go to bed! Ocarina of Time was a game that had captured my imagination in such an amazing way. I would dream about Hyrule and its wonderful cast of characters. I would sing to myself the various Ocarina of Time songs and replay it again and again.

In 1999, I read a piece of news on Nintendo Power that made me really happy. Nintendo had confirmed that they were working on a sequel to Ocarina of Time! The news was limited, but I was already dreaming up the potential this game would have. Waiting time would fortunately be short, as the next year Majora's Mask made its debut. Even though it was released earlier in the year, I once again made the decision to get it at Christmas as a present. I had loved Ocarina of Time so much that the logical thing would be to ask for the game at Christmas alongside Shenmue for the Dreamcast (another game I also loved, but that's a story for another time). I had gotten the game alongside a brand new DVD player, so I was very happy and grateful for the presents. Of course I loved Majora's Mask, but its effects on me were different from Ocarina of Time. While that game filled me with imagination, Majora's Mask just plain scared me! That's another whole story to tell, but needless to say, I still loved the hell out of that game, and would play it with my friends from college.

What I didn't realize at the time, though, is that I would be starting a tradition that would continue for a long time. In 2003, Nintendo released Wind Waker for the GameCube. I admit I felt indifferent towards it when it was revealed and then eventually released, but it was Zelda, it was the GameCube, and it was Christmas. I had to have it, regardless of what my heart was actually thinking. Overall, Wind Waker would wind up being my least favorite of the 3D Zelda games, and I didn't even beat it until much later, when I was bored with nothing to do.

2006 would be a great year for Nintendo fans. Not only was the DS finally starting to have amazing games like Elite Beat Agents, New Super Mario Bros and Castlevania: Portrait of Ruin, the Wii also launched, and EVERYONE I knew owned one and said it was THE MOST AMAZING THING EVER! Of course I HAD to have it, and Christmas would be the perfect time for it. I asked for a system as well as Twilight Princess, but what I didn't expect was that the system would be the IT present of the season. Everyone wanted one, and thus the shipping units suffered for it. Stores failed to carry the system and its games, meaning that I had to change my wish list. That year would have some great presents, but no Wii and thus, for the first time ever, no Zelda...or so I thought.

That year, my best friend came to visit me during the holidays. He brought his Wii over and we had a great time. One day, while we were showing him the sights, we stopped at a GameStop to see what they had. We then decided to buy Twilight Princess for the GameCube by combining some holiday gift cards as well as some money I had. After a long wait, we bought the game and, after coming home, we played it through the rest of his visit. It was one of my most cherished moments in my life. Not only did I have my Zelda game at Christmas time, I was playing it with my best friend. It's like God woke up one morning and decided to give me the two things I cherished the most in life: friendship and Zelda.

Putting the cheesy sentimentality aside, Zelda has become a staple of the holidays for me. Yes, the games don't take place during Christmas, but it has become a tradition for me to either play a Zelda game on Christmas, or receive one during the holidays. This year marks the release of both Ocarina of Time as a 3D remake for the 3DS, and Skyward Sword for the Wii. I have heard nothing but great things about them, but unfortunately things are rough at my household, so I don't know if I will receive either of them for Christmas (or Three Kings Day for that matter).

But what I want this holiday is just peace and happiness. That's what the Zelda games have provided me with throughout the years. Not all of them were great, and some inspired different emotions in me, but all lifted my spirits high and captivated my imagination in such a way that no other video game would do in my years as a gamer. That's why I tend to associate Christmas with Zelda. The holiday season, for all the mass consumerism and the cynicism that it inspires, is really about being happy, taking time to reflect on everything you have experienced the rest of the year and cherish the memories you have made and the people you have around you. I may not be able to have tons of presents this year, but I will still keep a feeling of hope and happiness in me throughout the season, something that the Zelda games help inspire.

Thank you, Mr. Miyamoto, for creating such a great series of video games, and to Nintendo for always being there for me in one way or the other, through the good times and the bad. I may not have a 3DS, but working with such a great group of people at Nintendo World Report has certainly kept the Nintendo essence alive and well.

Happy holidays everyone, and may your Christmases, Hanukahs, Kwanzas and Winter Solstice events be filled with princesses, evil pig lords, swords, fairies, hearts and Triforce pieces!