It helps when the competition can't ship enough to meet demand, but still. 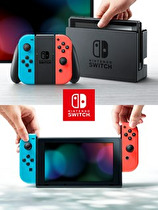 The Switch has made sales history again.

Citing reports from the NPD Group (whose full report will be available tomorrow), the Switch+Switch Lite sold more than 1.35m systems in the United States in the period of November 1 - 28. The Switch fended off competition from new console families from Microsoft and Sony, though it is possible that one or both of these may end up being the top seller by the NPD's usual revenue rankings.

The timeframe measured included what was expected to be a muted Black Friday, but does not include the "Cyber Monday" online shopping. It also represents a decrease of approximately 5% from the November 2019 sales period, which coincided with the launch of Pokemon Sword and Shield. Still, the Switch has now led the US in unit sales for 24 consecutive months.