Is one of them Mushroom Man? Because this looks like the kind of game that uses Mushroom Man. 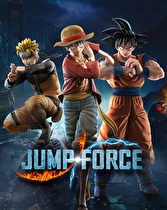 One of early 2019's bestsellers is coming to Switch with a new mode and some previous DLC characters in tow.

Jump Force, a Spike Chunsoft-developed brawler featuring a crossover of characters featured in Shonen Jump magazine, will come to Switch. No release window was given for the game, which stars characters from franchises including Dragon Ball Z, Naruto, Yu-Gi-Oh, and One Piece.

The Switch version will include a 3v3 local multiplayer mode, as well as the first pack of characters released as DLC on other platforms. A second character pack will be available post launch, with characters from Jojo's Bizzare Adventure, Bleach, Hunter x Hunter, and Yu Yu Hakusho.