Plus a couple of price drops for other farming sims. 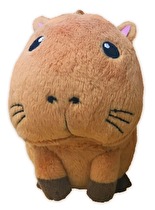 XSEED has made a couple of announcements about their farms, including a unique preorder bonus.

Preorders for next spring's Story of Seasons: Trio of Towns will come with a plush capybara. Standing about 3.5" tall, the animal will be available at "select retailers" with preorders.

Merciful heavens, it's a capybara. If they hadn't already enslaved me as a fan, they would have done so now. (There will be blood as my children fight over it.)

If you're going to make a farming sim, the world's largest rodent is the obvious choice for the pre-order bonus.

Oh nice, I still haven't bought Rune Factory 4 yet. However, I didn't think they were still producing physical copies, so I'm not so sure I'll be able to find one...

They show it in stock on their own website for $30+shipping.
http://www.xseedgames.com/store.php#3ds

Thanks, but shipping kind of kills it, and there may be tax. I was hoping to find it in a holiday sale, or at least at Best Buy so I could use my GCU discount.