Another chance to get my hands on a Rosalina? Yes please! 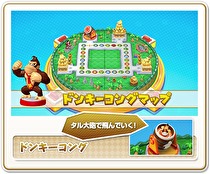 It appears three additional Amiibo will be included in the Mario Party 10 line of Amiibos.

Over on the game's official Japanese site, new Amiibo for Wario, Rosalina, and Donkey Kong are all pictured.

As for whether these will be included in the upcoming Super Mario Bros. wave of Amiibos remains to be seen, but fans can at least rejoice in the fact that there might be another opportunity to snag a Rosalina figure.

Have you been furiously collecting Amiibo in an attempt to get them all? Let us know in the comments below.

I just hope they slow down the release schedule a bit. It is obvious they already cannot create enough to meet demand. Also, while a number of people like myself had hoped to buy 1-2 a month and eventually amass all we preferred, the scarcity -further compromised by scalper exploitation- means fans are forced into an "all or nothing" race to catch them all. If Nintendo would just come out and confirm that they would continue to make them until demands were closer to being met I suspect we would have a lot more happy fans.


Plus who ever heard of pre-orders selling out? Didn't pre-orders (especially of limited edition items) tell the company how many to make for their runs in the first place?

Plus who ever heard of pre-orders selling out? Didn't pre-orders (especially of limited edition items) tell the company how many to make for their runs in the first place?

That would assume that pre-orders are for units in pre-production, which is never the case given the time frames. In this instant, internet world, it's easy to forget that physical goods and the logistics of them are planned months in advance. Apple has the money and the business savvy to spin up the factories and the supply chains to announce a new product, have it available for pre-order, and be able to fulfill those orders within a few months. They are an exception, and Nintendo is certainly not as good as them.