The complete version of escapeVektor has almost escaped onto the eShop. 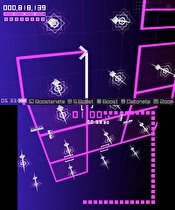 escapeVektor for the Nintendo 3DS from Australian developer Nnooo will be releasing December 20 on the Nintendo eShop in the US, Europe, Australia, and New Zealand. The game will be priced for those regions at $9.99, €9.99, AUD$13, NZD$17.

escapeVektor is an arcade-style action game where players must take control of Vektor, who has been trapped inside of the player's CPU. The overall goal of the game is to guide Vektor throughout the various levels in order to escape from his imprisonment. Many enemies and obstacles litter the landscape, with a variety of different hunting patterns. As the game progresses, old code and memories are unlocked, furthering the story.

escapeVektor: Chapter 1 was released last year on WiiWare and was to be one of four separate chapters. This new 3DS version features all of the content that was planned for the separate chapters plus more.

"There are 150 levels in escapeVektor, spread across 27 different worlds," said Nic Watt, Creative Director at Nnooo. "We've also included additional enemies and obstacles, 3 types of online leaderboard and a new Wildcard system. We're really happy with how this "complete edition" version of the game has turned out."

Nnooo is pleased to announce that escapeVektor™ will be released on the Nintendo 3DS™ and PlayStation®Vita (PS Vita) on the following dates in December:

escapeVektor is a retro styled arcade game in which the player controls Vektor, an entity trapped inside the player’s CPU. The player has to help Vektor escape the CPU which has been holding him captive. In making his escape, Vektor must get through obstacles and avoid enemies, each with different hunting patterns and intelligence. As the player completes the various levels in the game, escape becomes more difficult. New abilities unlock to help the player outwit and destroy the CPU’s army. As the player continues through the game, old code and memories are unlocked which reveal more about Vektor’s past.

The release of escapeVektor follows last year's release of the critically acclaimed and award-winning escapeVektor: Chapter 1 on WiiWare™. Initially planned as a 4-chapter series, Nnooo decided to roll all the chapters into one game and release it on the Nintendo 3DS and PS Vita.

"There are 150 levels in escapeVektor, spread across 27 different worlds," said Nic Watt, Creative Director at Nnooo. We've also included additional enemies and obstacles, 3 types of online leaderboard and a new Wildcard system. We're really happy with how this "complete edition" version of the game has turned out."

Players will be able to check their scores for each level of the game against scores of their friends, other players in their area and all players in the world using escapeVektor's 3-tier leaderboard system. In addition, when a player completes a level for the first time, or beats a previous high-score on a level, they will be awarded a Wildcard. Wildcards can be played before starting a level and will double a player's score if they successfully complete that level. However, the Wildcard will be lost if the player fails to complete the level.

"The game uses the unique features of each handheld device," said Watt. "We're using the 3D graphics of the Nintendo 3DS to bring the game to life. On the PS Vita we use the gyroscope and the touchscreen to adjust the camera angle and move Vektor around in the overworld maps."

escapeVektor will also be released on PlayStation Vita in the US. Release date and pricing will be announced soon.

Been waiting for this game to go on a portable to pick it up.