Our NY/NJ crew is getting together on July 27 to live stream some Mega Man games. 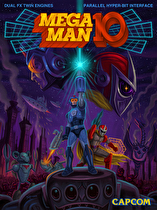 With the 3DS being a haven for Mega Man's NES years, a lot of the Nintendo World Report staff has been reliving our childhoods (or trying to see what everyone else's childhoods were like). So, it seemed like a fun idea to get together, play some Mega Man games, and share it with the Internet. On Saturday July 27, we will be getting together to play a variety of Mega Man games and some other mildly relevant games. And since it's not really a marathon (we'll only play, at most, 4 Mega Man games), we decided to call it a 10K.

What?: We are playing Mega Man games, mostly from his NES days. We'll also dabble into some weird competitions of Mega Man Soccer, Super Smash Bros. Melee, and F-Zero X (or GX)

When?: Saturday July 27 beginning at 2 p.m. ET and running until around 8 p.m. ET. See below for the full schedule.

Where?: Check the embedded video below when the day comes, or check us out on Twitch.

If everything is nice, we'll take call-ins over Skype. We will update with more details if we do this.

Schedule (Times Are Estimates, As Game Time May Vary)