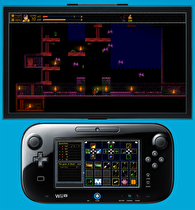 This week is mildly medieval with the Wii U platforming RPG, Unepic, and the quest to conquer Dracula in Castlevania II: Simon's Quest.

Have you ever set down with a group of friends to a nice game of Dungeons & Dragons? what if you were transported to the game world? Would you be able to survive? Unepic puts you through just that, with 200 rooms to explore, seven bosses to slay, 100 weapons to collect, and dozens of quests to complete.

If Mario Kart still feels like a ways off, you could always give F1 Race Stars: Powered Up Edition a try. It's like Mario Kart, but instead of playing as the inhabitants of the Mushroom Kingdom, you take control of several, miniaturized F1 racers.

It's time to take hold of the Vampire Killer and fight yet another battle against Count Dracula. If you've played the original Castlevania, you might want to follow it up with Simon Belmont's second quest to conquer the king of darkness.

Simon's Quest is also availibe on the Wii U this week.

Unepic looks pretty cool. I've never heard of it before this announcement.

At this point I'm beginning to think Nintendo is refusing to release Super Mario Bros. 3 out of spite for me personally.

Didn't they promise Super Mario Bros 3 by the end of 2013 in that Nintendo Direct?
As for a Mario Kart Substitute, I'd say Sonic and All-Stars Racing Transformed on Wii U is better than Mario Kart Wii or Mario Kart 7. Just go buy that. You can even play online.

Yeah, they did. Hence JP's frustration.

I should go back and make sure they said 2013 and not "this year," which could be referring to the Year of Luigi, which I don't think Iwata's going to let end until the company's profitable again.

At this point I'm beginning to think Nintendo is refusing to release A Link To The Past out of spite for me personally.