Further Evidence for Wii U Version of Call of Duty: Black Ops 2 Leaked?

A QA tester for Call of Duty: Black Ops 2 lists duties that include testing the game's PS3 & Wii U versions. 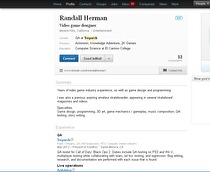 Randall Herman, a quality assurance tester at Treyarch (the developers currently making Black Ops 2), updated his LinkedIn Profile to include "QA testing on PS3 and Wii U" under his duties with the game. The full listing can be seen below, we have also added a screenshot of the profile in case it gets taken down.

This is in line with earlier news about Treyarch studio head, Mark Lamia, hinting at the possibility of a Wii U version of Black Ops II in an interview with PressFire. However, despite previous and current evidence for the existence of this game, Activision has not technically announced the existence of a Wii U version of Call of Duty: Black Ops 2.

QA tester for Call of Duty: Black Ops 2. Duties include QA testing on PS3 and Wii U, multiplayer testing while collaborating with team, ad hoc testing, and regression. Bug writing, research, and documentation are performed with each issue that is found.

It's pretty much expected at this point.  I wouldn't be surprised if Activision is waiting for some upcoming Wii U blowout before they announce the game.

This will be my first call of duty, I suppose now that we finally have the definitive version this is when the game takes a dive in quality.

I rejoice at the thought of this game. I tremble in fear at considering using dual analog controls if they abandon the Wii Remote control scheme.

Good point Cai, I mean they have a good control scheme already from the original Wii versions, so there is nothing stopped them including that as an option.
Can you imagine the back of the box though?
Compatible with: GamePad, Wii U Pro, Classic Controller Pro, Wii Remote & Nunchuck.

You forgot the Wii Zapper

No Balance Board, no buy.

Balance board support could be fun during those super intense quicktime cutscene things. Might also be useful to control a tank or helicopter or whatever sort of robotic things they are bringing in.

Kneel down on the board to crouch, run in place to sprint, lean and step forward to do a melee attack; your balance affects the accuracy of your shooting.

Having not played one of these, on the Wii Call of Duty games, do most people favor the Wii Remote control scheme when playing online? I'd love it if there were cross platform online play and the Wii U players could kick the so-called "hardcore players" butts.