You can look forward to watching Santa fight dinosaurs again when Super Scribblenauts comes out this fall.

The new game will focus on improving the formula that made the original title a million-seller, by adding improved touch screen controls and the use of adjectives to modify the objects created in the game. The use of adjectives will dramatically increase the distinct number of creations the game allows. Some examples include adding "flaming" or "flying" before a word, to completely reinvent the object or person being created. The game also supports the use of multiple adjectives per object.

Although the original Scribblenauts was well received commercially, it was widely criticized for its implementation of touch screen controls. The new game promises to fix those issues.

The original game was released in September 2009, and sold 1.1 million copies worldwide. 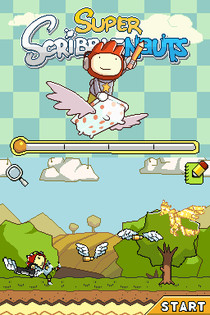 THE FOLLOW-UP TO THE REVOLUTIONARY GAME FOR NINTENDO DS HAS AN OFFICIAL NAME PLUS MORE WORDS, ADJECTIVES AND LIMITLESS CREATIVE POSSIBILITIES FOR GAMERS OF ALL AGES

Warner Bros. Interactive Entertainment announces Super Scribblenauts as the title for its follow-up to the groundbreaking hit video game. In the first game, players used their imagination to write any word to bring that object to life and use it to solve puzzles. The original Scribblenauts for Nintendo DS has sold more than 1.1 million units worldwide since its launch in September 2009.

Available in autumn 2010, Super Scribblenauts for Nintendo DS expands the innovative elements from the acclaimed first title, offers upgraded controls and provides gamers with hours of original entertainment with ingenious, fun-filled new features. In Super Scribblenauts, created and developed by 5TH Cell, players use the stylus and touch screen to help Maxwell, the game’s hero, acquire the “Starite,” the prize earned from solving the puzzle in even more robust challenges and redesigned levels.

All-new for Super Scribblenauts, players now have the ability to write any object that comes to mind and modify it in any way they desire using adjectives to reach the goal in many levels. Adjectives can change the colour, size, style, behaviours and many other aspects of the object they are describing. Multiple adjectives can be combined together to produce incredibly creative objects, such as gentlemanly, flaming, flying zombies and purple, obese, winged elephants, allowing the player’s imagination to run wild for an even more inspired and individual experience than ever before.

It doesnt seem to make any reference to how items interact with other items.

My guts tells me that this won't be so much a sequel as the game they SHOULD HAVE released first, kind of like Wii Fit +.

I think it'll be a upgrade, not an entirely new game.

A game like this hasn't been attempted on closed consoles, so it a trial and error process.
They introduced a new concept and released it to market. It was nowhere near perfect, but it was playable and enjoyable(if not extremely frustrating at times) and most people that played are likely looking for a much improved sequel.

If they deliver the game with the controls that fixed the flaws of the 1st game and add to the vocabulary in a way that truly adds to the gaming experience, then this game could do much better than the first one.

I would guess that Super Scribblenauts 3D will probably have voice recognition too should there be a sequel after this one.

I'm surprised Thatguy has yet to post about how this "more-of-the-same sequel" is still squandering the potential of this game concept.

My problem with the first game wasn't really the controls, it was the fact that there was no story or cohesive world. I think the game would be 1000x more interesting if it had a story, and if the challenges you were presented with had some sort of logical story-based reasoning behind them.

a story mode would be a nice addition.

How would you make a viable story mode out of this.  I like the simple concept of just having single puzzles.  Not everything has to be story.

Also, I like the name Super Scribblenauts.  I reminds me of my youth and my favorite console of all time.

I'm going to have to rent this one, the last one was good on paper but the lack of D-Pad control killed it.

This excites me (that's what she said).

Usually here in Japan it takes a minute to get retail releases at our American stores. (I won't pre-order Everything)

I was anticipating the first one then by the time it got here the "Hands On" reviews were out so of course I changed my mind but as most has stated the concept of the game is crrddddazy! Plus it won some awards for innovation.

So now thanx to the early adopters I can feel confident in this new title.

I think a taboo mode where certain words are banned for each level would be interesting.

That's brutal, but it would force some major creativity for the levels toward the end and we would realize the limitlessness of the game.

But oh how many crybabies will we get due to its difficulty. Maybe a unlock-able mode after your first run-through?

The first game suffered from the fact that you could beat most levels using the same objects over and over, so I would support a mode that forces you to use more objects.

You could get around this by going back to an earlier level and beating it a different way--then the game would show you a list of the 4 ways you've beaten the level and you could choose one to "clear" so you could use those items again in a different level.

That's part of the challenge. Better grab a thesaurus and figure it out or stop using things you don't need.
It's an extra challenge mode meant for the hardcore Dictionerds® that have probably already beat the game, it's not supposed to be easy. There are over 20,000 something words to choose from, so I'm sure you'll find another way.

There could even be an online leaderboard for that mode to see how far people got.

It's bad level design if there's a point where your options are limited enough that you could screw yourself over.

Generally I'm not in favor of letting your performance in early parts of a long game screw you over in later parts.

With so many more options this time and the inclusion of adjectives means we can have 20 different styles of the same thing. Unless the root word is what gets limited.

Generally I'm not in favor of letting your performance in early parts of a long game screw you over in later parts.

extra mode. maybe unlocked after you beat the game. Designed for the Hardcore Dictionerdy®. I think it would be a great replay challenge extender.

and about the online leaderboard thing. Maybe attach it to a "Beat The Clock" mode, where you have to make it through a certain amount of levels before time expires and the leaderboard would show how many levels were cleared, how long it took and how many words were used and how many items were used.

With so many more options this time and the inclusion of adjectives means we can have 20 different styles of the same thing. Unless the root word is what gets limited.

There are plenty of ways to get to something that works similar for many things; like fire:

and who knows how many other things I didn't even think of. Hardcore Dictionerds® will figure it out.