Is Legend of the River King Worth Checking Out? 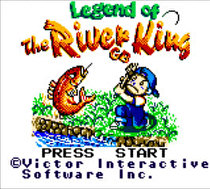 One of my favorite things about the Virtual Console is when a game I was always curious about comes out and takes me by surprise. It's even better when it's something that no one else really knew about before because it gives you that nice sense of group discovery. That led to me finally playing games like Gunstar Heroes and Gargoyle's Quest, and discovering really random stuff like Tumble Pop and Fortified Zone. Sure, I'll always buy the classics like a sucker every time they're available. It's a miracle I didn't cave and buy Mega Man 3 when it hit 3DS Virtual Console earlier this month.

This week, an old Natsume game hit the Virtual Console: The Legend of the River King. This Game Boy Color version originally came out in 2000 and was an improved version of an older Game Boy version. River King is one of those almost mythical series I would read about as a kid and then never ever play. I mean, it is an RPG about fishing. What the hell?

I've been on the fence regarding it, and so far all I've really heard from others is “I heard it was good.” So, since my questioning on Twitter and in-staff e-mail failed, I'm going to ask you, dear readers. Is The Legend of the River King any good? Does it hold up today? Is it worth playing or are its mechanics bested in other games I should find? And the biggest question: how exactly does it even play? Talk it up in the comments below. I look forward to hearing what you all have to say.

I can't comment on the original because I haven't played it but I am currently in the middle of playing the DS version.  I've put about a dozen hours into it and so far I've really enjoyed it.  If you like the Harvest Moon games you'd probably enjoy Legend of the River King.  The game is pretty laid back, though it does get a little repetitive, the story is alright but not anything revolutionary.  Like Harvest Moon, it doesn't sound that much fun on paper and it's hard to say why it is fun, but the game just somehow is fun.  I don't know that I'd play through another game in the series anytime soon but to play at least once it's definitely worth it.