This is one devil I don't want exorcised.

So this is what it feels like to be 70 years old.

After a day’s worth of work put into Brain Age: Concentration Training, this sad fact is all I have to show. Oh, and I’m currently being graded at a Level F. So, you know, that feels pretty great too.

Dr. Kawashima has been mocking our brains for nearly seven years now, kicking things off with Brain Age: Train Your Brain in Minutes a Day! for the DS in 2006. In Brain Age: Concentration Training, his latest joint effort with Nintendo, Dr. Kawashima has a different goal. While the original Brain Age and its sequel aimed to keep one’s brain active, the good doctor now has his sights set on your Working Memory. Working memory is the area of your brain that concerns itself with the storage of temporary information. An example cited within the game is a cooking recipe; you read the instructions and recall them shortly thereafter. Dr. Kawashima is placing his attention on this specific area due to the distractions we face now. It was just a year after the original Brain Age released that the iPhone came to be, which allowed smartphones to be added to the growing list of distractions we face. Dr. Kawashima’s goal with Concentration Training is to put our lives back on track, allow us to ignore the interruptions and focus on what needs to be done. 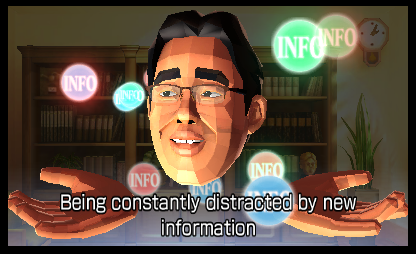 Which leads me here, a seventy-year-old brain residing in my skull. A notion proven by some simple math.

If you have played the recently released demo for Concentration Training, you’re familiar with Devilish Calculations. Unlike the demo though, I was thrown into a 5-minute gauntlet of numbers and smooth-talking devil-men. If you’re not aware of how Devilish Calculations works, the goal is to remember the answer to the previous question, not the one on screen. It starts simply enough, but as you progress, the answer you input was for an equation that goes further and further back.

I’m not afraid to admit that I did terribly. Although, I’d be willing to argue that a 70-year-old would fare just the same. I think putting a 3DS into the hands of a geriatric would hardly yield the same results, in fact, I’m not sure the thing would even be turned on. But I’m not here to mock one’s intelligence (I’ll leave that to Dr. Kawashima), I’m here to tell you how awful I did. And it was certainly quite awful. While I managed to work my way from remembering one answer back all the way to two (albeit a level named Slow 2-Back), I could go no higher. Five minutes begin to feel like five days as I flunked my way through Kawashima’s School of Hard Knocks. When all was said and done, the crude, polygonal, horned head of my teacher dropped the 70-year-old bomb, and followed it up with a letter-grading of F. 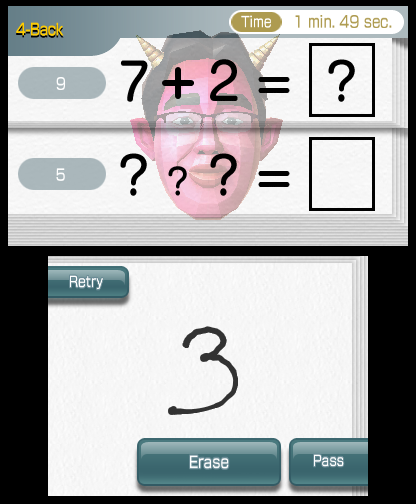 Of course, there’s always tomorrow. Even better, I’ll have new exercises to try. Perhaps I can put the doctor in his place next time.

Yeah, I'm not quite sure how they judge your "Brain Age"


So I call bs on Dr. Kawashima.

Yeah, I'm not quite sure how they judge your "Brain Age"


So I call bs on Dr. Kawashima.

Don't worry too much about brain agings, I haven't come across many in my time with the game. Even successive attempts at Devilish Calculations don't result in a new Brain Age or anything. As you'll see in upcoming blogs, the game takes a different approach to bring you back for more.