Iwata - On the other hand, did you have any instances where you would butt heads with those on the dev team that played hardcore online games?

Saitō - Of course, everyone had lots of ideas, but I think those people thought back to the first time they experienced online games ten years ago. Because of that, I think we were all able to stay on the same page about “Dragon Quest X” being meant as people’s first step into online games.

Fujisawa - However, there were still lots of people saying, “I’ve never heard of an online game like this before. That game does that, and this game does this - are we sure it’s ok that our game doesn’t do these things?” - there were always people who wanted to cling to the conventional things that they’d seen before, or just people who were uneasy about what we were doing. That’s why, every time that happened, I’d reiterate again and again that “‘Dragon Quest X" is going to do something new and, “We want to make it the kind of game that completely different kind of people can play as well.”

Iwata - Just like with customers who are afraid of entering an unknown world, I’m sure it must have been scary on your end, not being able to use the know-how that you’ve accumulated up until this point, and not knowing what lies ahead.

Iwata - But whether you’re scared or not, there’s no moving forward unless you do it.

Saitō - We got all of the staff together to get everyone on the same page numerous times. We would reserve a large conference room, invite the whole staff to it, and there, in front of all of them, Horii-san would say, “Let’s make it this kind of game.” 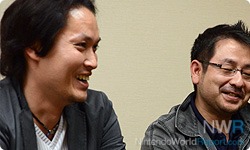 Iwata - People naturally get uneasy unless they can adhere to a pattern that’s shown results before, so perhaps the only way to get past that was to say the same things over and over.

Fujisawa - Otherwise, I think it’s a matter of “how quickly can you get everyone to share the same image, and arrive at the same point.” It took quite a while to reach that point this time.

Iwata - You are all in charge of leading these people through a dark tunnel, saying, “There is definitely light on the other side” all the while, but these people didn't know for themselves whether or not that the light was really there, so they had to continue moving forward just believing you.

Fujisawa - Yes. If that light doesn’t really exist where we’re going, we’d certainly be hurt, but more than that- the players looking forward to a new Dragon Quest would be even more hurt, and there was a time when we really were at a loss because we couldn’t see just what the future held.

Horii - But you know, it was actually “IX” that opened the way for us.

Iwata - In what sense?

Horii - “Dragon Quest” has this side to it that’s part communication tool because you end up communicating with people by playing “Dragon Quest.” With “IX”, you really were able to play with others, use the tag function, and share that experience. I think that “X” is an extension of that.

Iwata - I’m sure that in reality, quit a high percentage of players experienced the multi-player aspects of “IX.”

Fujisawa - Indeed. It was a big thing to have the dev staff play “IX” and be able to share with them that, “Perhaps this is what playing Dragon Quest together with everyone is like.” So for “X,” “IX” has a very significant meaning, from an existential standpoint.

Iwata - Looking back now it seems obvious that “X” would be possible after “IX,” but were you already aware of this before hand, Horii-san?

Horii - They were developed in tandem, so I wonder myself. It was kind of like…. well, maybe it’ll be kind of like this? (laughs)

Fujisawa - When the “X” project began I was handling “VIII,” and “IX” didn’t even exist yet. But then development ended on “VIII,” the DS was already popular around the world, so it was decided that “IX” would be developed for the DS in parallel with “X.”

Horii - The biggest reason I wanted to make “IX” for the DS was because I thought that people could connect wirelessly and play together in a snap without any hassle. Back then I thought that the ability to do multiplayer without any kind of setup at all was amazing.

Iwata - So you thought that, “With this, players can jump right in without fear and connect with each other.”

Iwata - These days the thought of having to take out a cable to connect is too high a barrier for people.

Fujisawa - And like that, “Dragon Quest IX” began, all the while “X” was being made in parallel. While I was away I left “X” to Saitō-san. All of the dev staff’s hard work during the period created a fantastic foundation for the project.

Saitō - It was because of that period that the Beta Test version went so smoothly.

Iwata - You began to see what multiplayer would be like with “IX,” and then made “X” a larger scale, deeper experience. And you know, this kind of game in particular is the complete opposite of the “fire and forget” approach of game development.

Horii - But that solidarity of making the game together with the fans feels good.

Saitō - Right. I’m looking forward to expanding the world together with the players.

Horii - We’ve never made something like this where you can change things after the fact. Up until now it’s just been put it out there, and you’re done.

Fujisawa - Right. Eventually each dev member will come to a point where they’re like, “That’s it!”, and cut all ties with a project, but there are times when that point comes during a rough patch, where that decision takes a lot of courage, so I think “how wonderful” that it won’t work out like that for this title.

Saitō - It would be wonderful if you’re still able to say that in three or five years from now. (pained laugh) 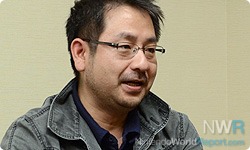 Iwata - How about you, Saitō-san?

Saitō - Although it was over ten years ago, I’ve already had that experience. Naturally it is fun, but just how incredibly tough it is…

Iwata - It’s tough that it will continue to go on for so long, and that type of energy you get from the back and forth with the players starts to dull bit by bit from the amazing high that it manifests itself in at the very beginning.

Fujisawa - Right. Players begin to get more and more critical.

Horii - Well, honestly, there’s a sense that “it better be good.”

Fujisawa - But today (the day that the interview was conducted) we just released the fix list for “Beta Test Version Phase 3.0,” and all of the testers really appreciated them. It’s this in particular, that I’ve never gotten to experience before in game development, and it really does feel like you’re making the game with the players. It feels so fresh.