There had to be some surprises! 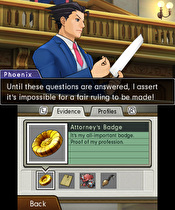 For the fifth entry in a series like Ace Attorney, one would think that the game would be mired in the plot of past games, filled with gameplay mechanics too obtuse for newcomers, and unapologetically unchanged from the original GBA entry. As it turns out, Phoenix Wright: Ace Attorney - Dual Destinies laughs in the face of those expectations, and manages to deliver a thoughtful experience that anyone can dig into.

The stories of Dual Destinies, though filled with plenty of references to past games, very much stands alone. You're still solving murders and you're still taking people to court using characters fans have (mostly) seen before, but the story is self-contained in the sense that every single case works towards the final, surprising conclusion. This is the first time the series has properly done that since Trials & Tribulations, and it's incredibly refreshing to see such a cohesive story in this long-running franchise.

Much like Grand Theft Auto V, Dual Destinies introduces three lawyers to play as for the first time: Phoenix Wright as the matured mentor, Apollo Justice as the lawyer with a bit of experience under his belt, and Athena Cykes as the rookie fresh out of law school. While Ace Attorney games have allowed you to play as multiple characters before, the brilliance of Dual Destinies is that each character, as you might expect, has an extremely different personality and perspective to bring to the table. Like the other big sequel introducing three characters for the first time this year, adding multiple playable perspectives allows the experience to stay fresh without ever dipping into monotony.

As for the gameplay, both investigation and trial situations have been made more accessible for a wider audience. Investigations no longer send you on a wild goose chase to find one minuscule piece of evidence; instead, you investigate a few very specific areas and maintain a log that details exactly who you need to talk to and what you need to do next. For the first time, investigations act as something fun to push the story forward instead of something obtuse to fear. Trial sections have changed by adding quick continues when you get a game over, regardless of when you last saved. The continues are very generous and make it so you never have to repeat more than a few minutes of gameplay when you fail. Although these new features certainly make the game much easier, they also turn Ace Attorney into a tighter game for a wider audience.

One of my favorite aspects of this game is its presentation. Visually, the game drops the 2D art from the past and brings in 3D models, a dynamic camera, and animated cutscenes. The soundtrack likewise manages to bring the audio of Ace Attorney into the modern era. If you want to know what I mean, listen to this killer Phoenix theme that I think stands as one of the best songs this year.

Not only is Dual Destinies generally up to the series' excellent standards, but it also manages to make a lot of smart decisions to bring this game to the modern era and a modern audience. The low difficulty may turn some fans off, but I think the innovation Capcom brings to the table makes Phoenix Wright: Ace Attorney - Dual Destinies, undoubtedly, one of the ten best games of the year on Nintendo platforms.