If for some reason you missed Link Between Worlds... 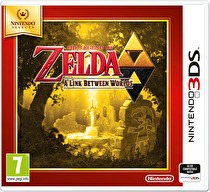 Nintendo of Europe is expanding the Nintendo Selects line to the portable realm.

Starting from 16 October, the line of discounted titles in the UK and Europe will add 3DS games to the existing Wii lineup. Nintendo Selects titles are traditionally sold at approximately £20, but pricing as always is determined by the retailers.

The titles entering the program are:

The United Kingdom is a small part of Europe.

I hope this happens in the US, I might get Yoshi's New Island and Mario Party Island Tour for $20.