Nuketown 2025 Map Available for Call of Duty: Black Ops II on Wii U

Out of nowhere, the Wii U launch title from Activision gets an update! 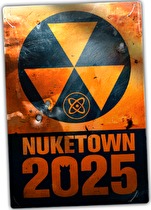 The Nuketown 2025 map, which was a free piece of DLC on other consoles, has now been added to Call of Duty: Black Ops II on Wii U. This is what the website NintendoLife discovered after booting the game up for the first time in a long while.

To get the Nuketown 2025 map, you will have to download a free update and install it. After that, you will be good to go and able to play at this location. The remake of the fan-favourite game boosts a 1960s retro-futuristic style, instead of traditional modeling in the original.

There is no reason given why Activision has suddenly added this DLC, nor why it was never announced. We also don't know what this means for any other DLC released by Activision for the title.

I played it last night. It was fun to get back into the game. I am hoping we see more of this in the future.

I feel like this was some sort of training exercise for some interns.

"Ah, you must be joe, nice to meet you. I should probably have you start with something small, eh, go put these maps on the Wii U version."

I can't help but think negative about this. Why now? Is it a bone toss because Advanced Warfare isn't being released on the Wii U?  There was nothing at all to do in the office one day? Some intern training?

Maybe its an appetizer before they release Advanced Warfare. #half full

It is a last attempt to get people to pick up BLOPS2 before it becomes even more irrelevant to gamers.

I'd have bought this game a long time ago if they'd put it on the eShop. It seems so unlike Activision to not let people buy the game in a way that gives them more money and cuts out the used game market.