Luckily, it just requires that you have a Wii U GamePad at the ready. 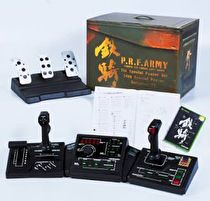 Nicklas Nygren, better known as Nifflas in the gaming community, gave us further insight in his new project.

This information came from an new interview we did with the acclaimed developer, in which he talked about the collaboration with KnapNok Games. Nygren said the following as a response to a tease about the project: "I shouldn't reveal too much without Knapnok's permission, but so the reason it is for the Wii U is uhmm... *thinks* Actually, when I heard about the Wii U for the first time, the fact that it would have a seperate touchscreen built-in with the controller I got quite excited. Because you know... Okay, you know the old game Steel Battalion for I think the first Xbox? This came with this huge controller, which was designed just because for that specific game. I guess it is kind of tricky to sell something like that, since you need to sell the hardware. The game essentially makes... wouldn't be able to play without having these buttons and stuff. I guess what the Wii U did by having a separate touchscreen and a controller at the same time, was that it opened up for a new like... I would say for that kind of game, where you can have more an advanced control system and menu. At the same time, it doesn't have to clutter what's happening in the game with a lot of elements that pop up on the screen. I started to think about what kind of games would be really excellent with this kind of hardware and what would work specifically well for the Wii U and we came up with this idea."

In an upcoming episode of Connectivity, you will be able to hear Nifflas talk about Knytt Underground, which is coming soon to Wii U. He details the ideas behind the title and how he tried to understand the world as a whole.

About f###ing time someone does that. Now if Nintendo would only commission Chou Soujuu Mecha MG 2 and release it in the west...