In-game posts now have their own community 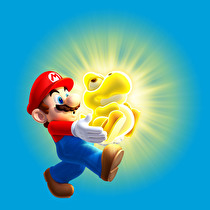 The new community is designated specifically for these in-game posts, so players are only able to leave comments. The original Miiverse community for the game still exists for game discussion purposes.

The update should automatically download and install once you start up New Super Mario Bros. U from the Wii U menu.

Damn. For the briefest moment, I had hopes that this patch was to put Pro Controller support into the game, which it should have had at release.  Instead, it's just more Miiverse B.S. Well, I guess the game can stay on my shelf for the time being, then.  Good for folks that like Miiverse, I guess.

I agree in a way, but I also think that we should be happy to know that the big wigs at Nintendo are at least contemplating how to make the online section of their games even the slightest bit better. That is something worth holding on to I believe.

why would they have to patch the game to change how miiverse handles in game posts? that should be a back end change, assuming miiverse gets data on where posts originate from.

All I'm thinking about is the New Super Luigi U DLC pack that's coming out! (Does anyone have an idea on the release date yet?)

Because that wouldn't give him something to bitch about. ;)

I've been over this before but...

1.  I try to avoid using the Wiimote if I can help it, unless the game involves pointing at things (which is all the Wiimote was ever good at).

2.  The gamepad is just too big for my hands (to the extent that I have to completely reorient my hands w/ games that use both sets of triggers), & I don't like that screen ALWAYS being on if you're using the controller.  In a game like ZombiU that's built around the two screens having unique content you need to constantly be using, it's fine.  But in games where all it's doing is mirroring the display I already have on my TV, I find that screen incredibly distracting.

The Pro Controller is smaller, lighter, & it doesn't have a screen I frequently don't need.  Yeah, I think Nintendo should have at least provided the option to use it in NSMBU.  Frankly, it should be supported in every game on Wii U that doesn't use the Gamepad's screen for a vital purpose.  Let the player choose how they want to play your game.

Because that wouldn't give him something to bitch about. ;)

not much variety there

why would they have to patch the game to change how miiverse handles in game posts? that should be a back end change, assuming miiverse gets data on where posts originate from.

They kept the original one.  So they probably had to change the ID used for it and took the opportunity to put in some bug fixes as well.